Zimbabwe: Chiota Community economically empowered to take charge of their own development 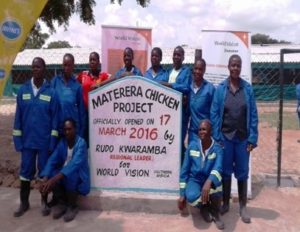 Chiota Greenfield partnered with private companies such as Zimbabwe’s giant day old chicks supplier, Irvines, to support women in implementation of commercial broiler production namely Materera Chicken project which comprised of 9 women and 2 men. The project members had been capacitated in community based management of the various projects they undertook. It was a best practice in that the local value chain development project help producer group, increased income by promoting collective selling and buying of inputs, increased their market knowledge and increased the quality of their produce. Women were economically empowered in managing their projects hence created a sense of ownership and a sustainable development which in the event that World Vision left the area, the group members would sustain the project. They would be able to provide for the well-being of the needy children without any external support.

The project sought to enhance small livestock production for commercial purpose in Chiota thereby improving the livelihood of participating households. The community generated income which in turn could help improve the well being of their dependents especially the vulnerable children in the community. By the above, the project would increase sustainable producer group income for the whole community.

An assessment and design of what had to be done was laid out for all to consider. Engagement of community and selection of project members followed. The engagement of Irvine’s Zimbabwe and relevant government departments was done in consultation with the local leadership. The siting, mobilisation of resources and setting up of the fowl run was wholly undertaken by the community members. Some training sessions on commercial broiler production, constitution development and conflict resolution, market facilitation, savings for transformation was carried out with the help of council and some government officials.

There project had a total of 2 913 beneficiaries. Of these 13 were direct beneficiaries (11 women; 2 men). Indirect beneficiaries accounted for 2 500 individuals (2 000 women;500 men). Online beneficiaries had the same number of recordings 200 apiece thus had a total number of 400 beneficiaries. The  total budget of the project was $55 000 broken down as follows:
The project had $45 000 and $5 000 on gender specific and gender in mainstream projects respectively. In-kind contributions amounted to $5 000. In addition Marondera Rural District Council and crop and livestock department provided all the technical expertise and valuable workshops were carried out with their blessings.

Focus group discussions were routinely held by the subcommittees during the presence of their respective ward councillors. The project coordinating committee held regular interviews with key informants and gave feedbacks to the project participants. Women and men would participate and took some leading roles in managing the projects. The respective stakeholders would gradually surrender the projects to the community and monitor it from a distance. They would only come in and give corrective measures whenever the needs arose.
|

The high transport and slaughtering costs were major challenges which the participants met. The project partners sourced a small slaughtering machine for the community members for use at the project. Political intervention almost derailed the project. The ward councillors tried to hijack the project for their own political mileage. The continuous awareness campaigns and workshops paid off in favour of project’s success. The resources to construct the fowl run were expensive but the community’s involvement through the supply of locally available resources such as bricks, water, river sand, pit sand and labour made the job easier. When business got conducted professionally success would be guaranteed. Some members of the project had tried to act unprofessionally but were fine tuned by the timely intervention of the project partners.  In communities, if women got empowered, they took charge of development initiatives more seriously than men. That was evidenced by the involvement of more women than their male counterparts. However, males were motivated by the success of the project such that they later wanted to join the initiative.

Josiphine Rwambiwa, the project chairperson said, “I now have skills and knowledge to coordinate resources, 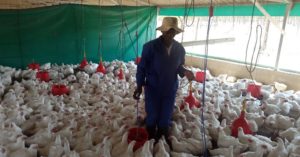 people, manage time, meet deadlines and achieve objectives and goals. I had very low self esteem before the workshops and trainings.” Gibson Kateya, the project vice chairperson said, “We are proud of this project, with women in leadership positions. We used to always wait and depend on well-wishers to supply our daily needs but we are now growing towards leading our own development and supporting women in leadership positions”. “We are now able to do self help projects without too much dependency on external parties. Materera Chicken project has been able to run about 11 cycles of production using income from the project without external support. We now contribute towards community development projects such as goat project for most vulnerable children, rehabilitation of school infrastructure, asset building”, said one of the project participants.

The project had taught the community, council staff, and stakeholders that all people were equal whether males or females.  Anyone could do any course in life. That was why both men and women formed the project. The project could be easily sustained. Through continuous capacity enhancement, building on already existing capacities and promoting community ownerships projects could be easily sustained. Some links with sustainable markets and partnerships having various players also sustained the projects. Production in businesses which enhanced economic development led to the project’s sustainability.

Comment on Zimbabwe: Chiota Community economically empowered to take charge of their own development Cancel reply