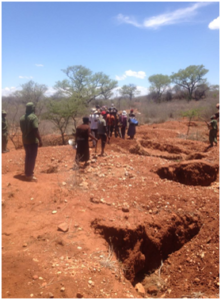 Education and awareness has positive effects on the fight against climate change. Firstly, it impacts individuals’ general perception of the issue, and secondly, it determines how they develop the necessary solutions and innovations to overcome climate change. It is important to educate on climate change. This solidifies the importance of ensuring that the information shared about climate change is as accurate as possible. The public has to be educated so as to understand the scientific concepts at the core. The people of Bulawayo have taken part in developing sustainable so that the future generations also benefit from the resources they have in the city.

The project objective is to make the Bulawayo community aware of climate change as well as its’ effects thus coming up with solutions to counter climate change challenges. The development of quality educational infrastructure, from primary education upwards, has a strong focus on Science, Technology, Engineering and Mathematics (STEM). The project has benefited about 2 000 people and has reached 1 000 indirect beneficiaries through different networks. Online beneficiaries are around 5 000 who include those who have website access, mailing lists and those accessing scholarly articles. Bulawayo City Council allocated $20 000 to this project. In kind contributions amounted to $2 000. The total budget for this project is $22 000.

Monitoring on the ground and implementation of projects in the face of climate change shares much in common with monitoring and evaluation. Patrols to areas with environmental degradation due to activities such as sand extraction and illegal gold panning which contribute to climate change as a lot of deforestation are done regularly. From 2015, about 2000 tickets were issued to offenders but that figure has been reduced to 750 tickets issued in 2017 which shows that fines play an important role. Another method which is used is community engagement, all problems affect the community hence it’s effective to engage the community.

Poverty has resulted in high levels of anthropogenic activities. Other challenges such as attitude, lack of knowledge and lack of interest have also contributed to the failure of addressing climate change issues. These can be overcome by conducting education and awareness more frequently so that information is given to the public and they have a greater understanding. Radio adverts, Television adverts, letters, notices and handouts have also assisted in conveying information for the public.

A community member from Bulawayo City Council’s Magwegwe high density suburb, one Ntonga, said that he 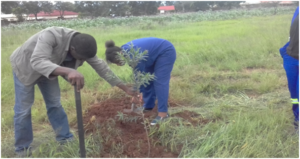 mobilizes women and supports them throughout their projects to curb climate change. They have formed a Women’s Gum Plantation Club which has significantly benefited from this climate change exercise. The club has projects like mushroom growing, sewing, poultry and rabbits rearing which have made the effects of climate change less as women have their own means of owning capital. The community has shown great interest especially women are ready to pursue with such kind of projects as they are rewarded in the end. These range from increasing knowledge and capacities of women and men through workshops and information exchanges, so that they can systematically integrate gender considerations in all areas of their work, to pursue the full, equal and meaningful participation of women in national delegations.

The involvement of all stakeholders has proven to be very effective. The oneness that the community has, is leading to a better perceptive on climate change issues as they are handling environmental issues so effectively and efficiently. They are now helping each other in projects for example providing capital for those practicing poultry projects. The community is now going out there to find knowledge about means of coping with climate change impacts effectively. This has made them to make partnerships with companies. The companies provide the participants with raw materials to partake in projects that reduce climate change impacts. The community has also been able to give back to the less privileged in the society.