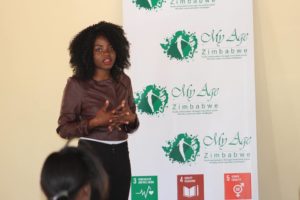 The Girls Choose project is aimed at raising awareness on child, early and forced marriages as well as creating an enabling environment for the elimination of child, early and forced marriages in Masvingo Urban and Chivi Districts of Masvingo, Zimbabwe. This occur through the empowerment of young girls to influence policy makers and stakeholders in their constituencies to enact and enforce laws against child marriage.

Child, early and forced marriages is a major development threat in the lives of girls and young women worldwide. It fuels adolescent pregnancy, forces girls out of school and perpetuates a recurrence of poverty through disempowering girls and impairing their economic resilience. This projection is set to be a reality in the next few decades unless adequate actions are taken to address practices that drive adolescent pregnancies, particularly child marriage.

The main challenge has been getting community religious and traditional leaders to challenge child marriages as some of the marriages are fuelled by various religious and cultural norms. We had to overcome the challenge by stressing out the importance of the girl child and education and also use the law so that they all understand the legalities within issues of child marriages.

Monitoring and Evaluation is an ongoing process as we implement the ongoing project and three activities that were prioritized are: Baseline, Mid-term and end term evaluation. The baseline survey was the entry activity in the project as an analysis of the situation to identify the starting points for the program. The Mid-term evaluation exercise was conducted in the 2nd month of the project implementation and end term evaluation will be conducted towards the end of the project by an external evaluator. The project is continuously subject to monitoring as noted in activity reports, monthly reports, quarterly reports and annual report. Evaluation forms during training as well as participant registers are used during activities.

About 30 young girls went for a two days training .The youth gained more knowledge on the consequences of child marriages and they will be equipped with advocacy skills .A total of 2 trainings were conducted in the 2 targeted districts. The advocacy training was looking at Basics facts on HIV, ‘Why Early and forced marriage advocacy?’, life skills and Human rights .The training utilized role plays, participant centred discussions and debates. Today the young women do referrals for service and case reporting in their communities. They also act as champions for girls and women’s rights including access to contraceptives as well.

Eventhough Midzi says, “Since l became part of the Girls Lead I have started to understand that every girl should be able to live her adolescent in the purpose and pursuit of achieving her dreams and not rush into marriage.”

One of the girls met during a training was about to be married off to a prominent man in the community and she heard that cased were supposed to be reported, she went back home and she thought of reporting the case to the Social Services department and the parents were taken to the chief courts and paid three cows as fine and the business man who had raped the girl twice was arrested and sentenced. This has impacted many families who are in the community.

Community leaders have become more informed about the issue of child marriage, the importance of keeping girls in schools as well as access to sanitary wear. This has made the project sustainable as community ownership of the project have been strengthened through community leaders and men involvement.

Community, religious and traditional leaders including policy makers are willing to take part in dialogues and in making sure they enforce laws that govern child marriages. The District Administrator in Masvingo said, “We should upscale this project so that no one is left behind in terms of ending Child marriage.”

MY Age is working on a project called girls lead which is a baby of the Girls Choose project. In this project 30 girls and young women were trained in Leadership around issues of child marriages, the Girls Lead Champions will continue engaging young people in their communities disseminating information on child marriages as well as referring young people for services. The trained chiefs will also instrumental in enforcing laws that govern child marriage in their communities.