Reproducing women are around 24% of the total population of Kadoma. Most women receive reproductive health services at the council clinics but could not access VIAC services whilst men were getting VMMC services for free at the same facilities. VMMC and VIAC are related services which are mainly aimed at reducing cervical cancer.

The Kadoma City saw it necessary to offer free VIAC services to women at the council clinics without referring women to other health centres.  Kadoma City has an estimated population of 103170 (2012 census), of the said population, 24.2% is the number of women of childbearing age. In 2014, Kadoma General Hospital started offering VIAC (visual inspection of the cervix using acetic acid) to detect cervical cancer at a fee of $5 per session. HIV positive women were more vulnerable to contracting cervical cancer. Kadoma being a mining town has more than 5000 women living with HIV.

The project aims to raise awareness to the community and stakeholders on the dangers of cervical cancer and the need for accessing VIAC services It is also targeting to improve the capacity for provision of VIAC services. In addition it seeks to offer services at Point of Care to 5 City Health centres by August 2018. Kadoma City Council wants to establish a monitoring and Evaluation strategy for VIAC and VMMC by August 2018. The Kadoma City had to secure funding as part of the project activities. The council had to undergo a training of staff and community mobilisers. The council sought to identify the possible working areas that they can carry out their VIAC/VMMC screenings.

The City of Kadoma had a gender specific allocation of about $12 000, $10 000 to VIAC Equipment procurement and $3000 to training and logistics. On amount that was contributed n cash or kind by partner organisations,$2000 was allocated to outreach VIAC T and S ,Kadoma General Hospital Equipment was allocated an amount of $1000 ,Rio-Zim Wellness program $2000,Capetwon University on Training and Accommodation $15 000. In total the budget was $45 000.

Some of the challenges that Kadoma City have faced include limited resources. There were not enough resources that could accommodate most of the patients with their different cancer cases. The Council had to organize other methodologies that would work to get rid of this issues of limited resources.

On critical or advanced cases, patients were to be referred to Harare City where the can be better treated. The VIAC training is also centralized and to solve this issues, the council had to make use of the government trained screeners, train city staff on program management and community mobilizers on demand creation.

Kadoma City Council is around the mining ground and this affected progress of the project at times. To save solve this problem, they had to make negotiations with mine to set time tables for their activities. The group again faced a challenge on their logistics, transport was the main problem. No transport was available to meet the demands of the project and this affected programs such as sites visitations. To overcome this challenge, the group had to make use of the available Council transport or use other partner’s cars to carry out some of activities. 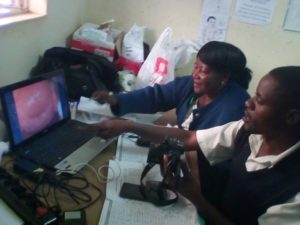 we used to go to the General hospital but still fail to access the service due to queues, they said I have no cervical cancer, and it took about 10 minutes”.

In the community, cervical cancer talks are now being given a chance including churches which used to regard this project as a taboo in their religion and beliefs. Church leaders can now allow reproductive health talks in church. Men can now appreciate the importance of preserving the women’s health through early detection of cervical cancer and men themselves volunteering to have VMMC. Trained community mobilisers have now taken the campaign to the door step, door to door campaigning on fighting against cervical cancer.

The project results and the lessons learnt have been shared with some of the authorities in Council so as to increase the interests of the management to continue supporting the cervical cancer screening especially for women and also sharing that initiating projects that benefit the community at large is a satisfying venture if well managed.

The project can be replicated since there are limited costs besides the procurement of equipment. There can be involvement of local cooperates to assist with medical consumable and refreshments. Continued community engagement and ownership can also sustain the project. They should take ownership of the project and manage it even in the absence of the Council. Training of City Nurses is again of paramount importance for the project to be replicated easily. The project be cascaded through peer review with other local authorities so that they can be able to cope and apply the good works of the good practise in their own councils