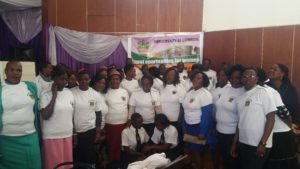 The need for gender equality has always been visible, therefore people were imparted with knowledge on 50/50 gender equality. The campaign wants to involve more women in decision making positions and the idea is to achieve 50/50 by 2030.

The project aims to educate and sensitise the community on gender issues. Through all this, they hope to reach as many people as possible and raise men’s consciousness about balancing gender in decision making platforms. It also aims to boost women’s confidence to participate in public consultations and capacitate them with life skills. The success of this project could enhance gender equality and fight against gender stereotypes that limit women.

Men are now involving women in decision making, planning and implementing projects at home. Men are becoming whistle blowers in wards, for instance in cases of gender-based violence. Men now assist their wives with household chores. Men are now allowing their wives to attend public meetings and women can be elected in decision making positions without any opposition from men.