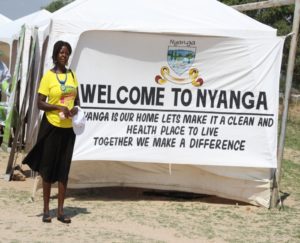 Nyanga RDC embarked on solid waste management to improve on a solid waste which was a problem. Litter was being thrown everywhere including backyard of residential accommodation, the streets and open spaces. That posed health risks and promoted proliferation of disease vectors such as flies, cockroaches and rodents that posed dangers to humans. Solid wastes could also cause over-flooding or block road drains. The council then adopted strategies to overcome the problem.  That waste management program increased the level of cleanliness both at household level and at public places. It improved the livelihoods of communities through sale made from waste.

The project aimed to achieve a regular refuse collection system by the local authority. It achieved to maintain clean environments at households, institutions and workplaces. These were a success story because of the education given to the community on sustainable solid waste management. The establishment of a waste recycling project was deemed necessary. The above objectives have to be accompanied by some activities so as to be achieved. Proper sensitisation of stakeholders; community members included; would be a good and strong starting point. The stakeholders, government agencies, private sector and the local authority included, needed to be trained regularly. Some community health clubs had to be formed to spearhead the project. The neighbourhood health committees were continuously trained by hired trainers on waste management. The project saw the procurement of refuse bins. Some clean campaigns were regularly carried out by different groups of community members from different social and professional backgrounds. As the project was unfolding, a monitoring and evaluation system was in place.

Gender specific allocation had $40 000 from the budget. The gender in mainstream projects was allocated $68 000. The workshops, hiring of trainers, procurement of refuse bins and campaigns were funded from the gender mainstream allocation. The project got $156 000 in cash and kind from the European Union. The local Member of Parliament for Nyanga donated 20 public refuse bins. European Union through its agent CAFOD $116 000 to buy a refuse compactor truck and the remaining $40 000 was to be channelled towards the solid waste management.

There were more women participants than men and all attended the trainings, workshops and awareness campaigns. These gatherings helped a lot in equipping the leadership with relevant skills. Vast improvements were noticed on the community in general and their households in particular. The leadership also started sale of recycled materials from waste materials. Some project steering committees were set up to spearhead the project. Sub committee meetings on health and hygiene were frequently held to appraise participants on the ground covered and the way forward. A baseline survey was also done by the project steering committee. Lots of community health club meetings were held at different levels of the community. Some review meetings were also held where ways to overcome challenges were aired.  The project design allowed for regular formal and informal feedback and would remain in place throughout the life of the project and beyond. An external financial audit would also be carried out by an accredited auditor to ensure accountability use of resources.

Residents were not aware of how the council ran its affairs thus they blamed it for everything. The council officials 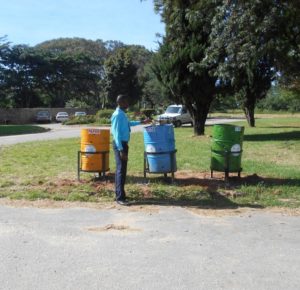 had to engage the residents and appraise them on how it works. The residents were urged to participate in all council run activities for capacity building and sustainability purposes. The project nearly suffered a stillbirth because the participants could not afford to buy a stand to operate from. However, the local authority came to the participants’ rescue when it allocated a stand to them. The local authority also gave them a security fence to deter vandalism by stray animals and at times by thieves. Lack of the necessary expertise was also a challenge when the project started. No one had the requisite skills needed. Qualified trainers from as far away as Karoi Town Council and Mavingo City Council were invited at different times to train the participants on how to run their project. All community health clubs were in attendance at the training sessions.  At first, the residents expected monetary returns from every workshop that they attended. After proper and explanations from the invited trainers, the participants finally understood that they were to reap later as the project rolled not during its’ infancy stages.

“I can now make basketry from recycled waste which I can sell and earn money to pay for my child’s school fees.” said Elizabeth Mahachi who is a vegetable vendor at Nyamhuka Business Centre. Men were then very supportive of such communal projects as they permitted their wives to attend the community health club meetings. During clean-up campaigns even men and youths came to participate in the waste recycling project. Residents had been educated on the need to fully utilise refuse bins and not to throw litter indiscriminately. Good relations later existed between the council and residents. The project results and lessons learnt had been passed onto the authorities in an effort to increase awareness and interest in communal economic empowerment.

A training-of-trainers model was very effective thus a continuous training on new products was welcome. The establishment of market chains for recycled waste was necessary. The project saw the birth of an Income Savings and Lending facility to the projects’ members. That led to the uplifting of the participants’ livelihoods as they could pay their children’s school fees and other basics. Fresh or new entrepreneurial skills were also welcome during the subcommittee meetings. The project could be cascaded through various media platforms like Gender Links website.