Zimbabwe:Women in Kadoma City partnering with Nyaradzo for Skills Development 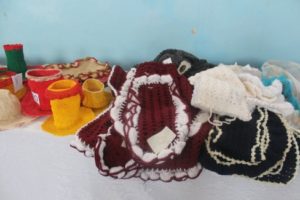 The City of Kadoma partnered with Nyaradzo Funeral Services in the empowerment of women through a skills training programme targeting women of various backgrounds in the City. The programme involved the identification of various women who were denizens in the City keen to acquire life skills that enabled them to change their life and self perspective in the society. It also helped to create a balance in gender socio-economic equity. Partnering with the private sector create a win-win situation that enabled exchange of various resources, skills and the socio-economic values and benefits.

The program was meant to create a partnership with corporate community in the City that would provide a skills development and motivation ventures benefiting both partners in their business and services provision fronts. The program was meant to see the participants contributing towards the implementation of the program while the local authority provided technical and administrative support. The corporate partner branded and provided financial support. The project was meant to see both parties benefiting in their own way.

The activities involved were the identification of corporate partners to support the financial and resource requirements of the project. The Local Authority mobilised women’s clubs and participants for the program. As the implementing authority was also suppose to identify the technical requirements in the implementation of the programme and strategies how the program could be supported effectively on technical elements. The main activity was the actual out rolling of the training of the women in the appropriate skills and ensuring that they master the actual concepts for lifelong application. Exhibition of the results of the program implemented was to be done with all the partners playing their part as the climax of all the effort.

45  women directly benefitted with 5  men directly benefitting as well. In total there were 50 direct beneficiaries. There were 12 000  indirect beneficiaries (10 000 women and 2 000) men. Online beneficiaries accounted for 1 200 (1000 women and 200 men). In total there were 13 250 beneficiaries. The project had a total budget allocation of $4 370. There was a gender specific allocation of $3 000. Gender in mainstream projects had an allocation of $500. Some donations came in cash and kind that amounted to $870. Council covered all costs in terms of facilities, transport and subsistence of the technical team and all administrative cost. Nyaradzo brought forward most of the assistance in kind.

Monitoring and evaluation was done through meeting, reports of events and monthly reports, statistical returns and follow up visits. The participants were organised to form some coordinating committees for all the clubs which were to be the mouth and facilitating agents for all the participants. The relationship with the partner was being kept going through frequent meetings with the Branch Manager for the Nyaradzo and their agents. The community appreciated and recognised functions and programmes as evidenced by the support rendered to the events. Some open and close ended questionnaires were often sent to the community at large. Their unbiased comments had seen the project growing in leaps and bounds. Surveys and general interviews in the community had assisted in monitoring the project areas which needed improvements. The community would also pass on its comments and suggestions through the suggestion box.

The program has helped us to realise what we can do if we are given adequate support as the women in Kadoma. We thank our friend Nyaradzo Sahwira Mukuru”, joyfull commented Joice Chitera who was the Chairperson of Women’s Club Coordinating Committee. The programme was supported by men who worked together with these women especially in ensuring that the partner continued to have faith in these women. The participants were supported too by their spouses who in the end had garments made for them in the process. Council staff members participated through encouraging various members of the community to be involved. The young people who were members of the Kadoma Youth 4 Development supported the project.

The participants displayed the change at household level through the application of skills that saw some participants making garments for other family members. It meant the families lives were bound to be uplifted and others would make garments for income generation thereby uplifting the family income bracket. The community was impacted by this project in that they realised that women whom they knew and identified with could make clothing outfits that made an impact nationally and beyond especially that that project was the first of its kind in the whole country. That made the demand for the skills training to grow as many community members felt that they would definitely benefit themselves and those of their families through such training.

The project had seen the women engaging Nyaradzo at community level some had initiated their own community activities. They had also established committees that pursued various ideas on issues of empowerment. A group called “I do I do” had been formed and other ladies were pursuing tree planting and beautification ventures in the city as a result of this project

Maintaining or upgrading the current standard would make the project easy to maintain. The professional environment currently prevailing needed to be maintained. The project strived to venture more into technology since it’s the in thing.  The project kept looking for more partners as it was still growing.