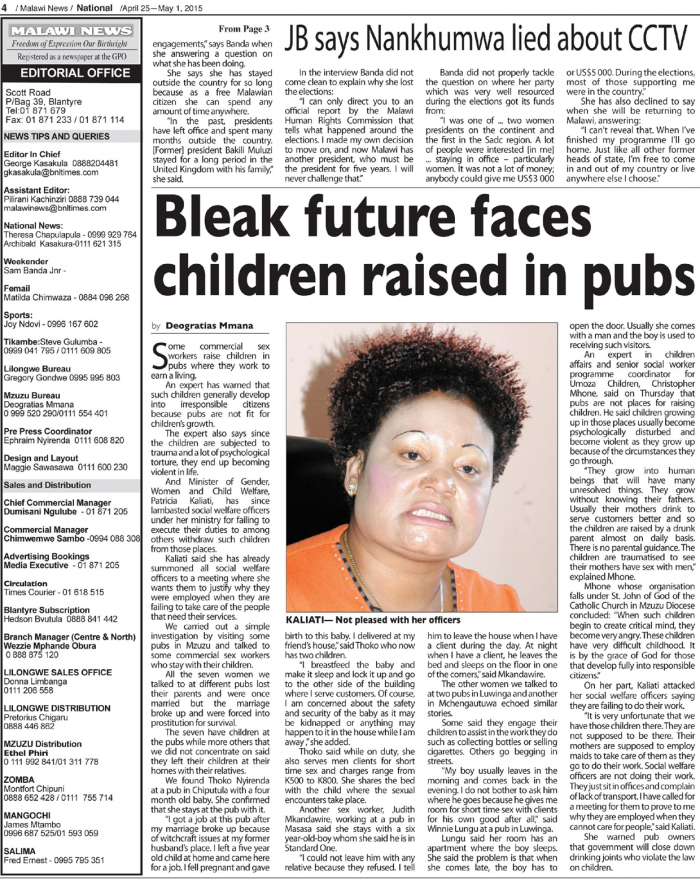 The story is about some commercial sex workers in Mzuzu who are raising their children in pubs to earn a living.

Looking at the headline alone, it speaks volumes that children raised in pubs have no future because their parents are commercial sex workers. It also separates such children from those raised in normal homes (decent homes).

Again, commercial sex workers’ children are exposed to trauma and psychological torture which may likely affect their future because they see their mothers having sex with other men.

The content of the story also exposes the commercial sex workers’ children to ridicule by their fellow friends as they are looked at as immoral children for the fact that their mothers are sex workers.

Since people have negative thought about them they (commercial sex workers and children) are exposed to all forms of discriminations.

Social welfare workers do not consider the need to rescue/ protect children who are being raised in pubs as evidenced by the minister responsible summoning some social welfare officers to a meeting to justify their failure.

The story only talks of female sex workers being responsible for raising the kids in pubs why can’t the fathers of those children be blamed?

The story is dwelling on female only to make it worse exposing their identities which also segregate them from other mothers in the area (community).

In conclusion, such commercial sex workers are looked at as failures to take care of their own children.