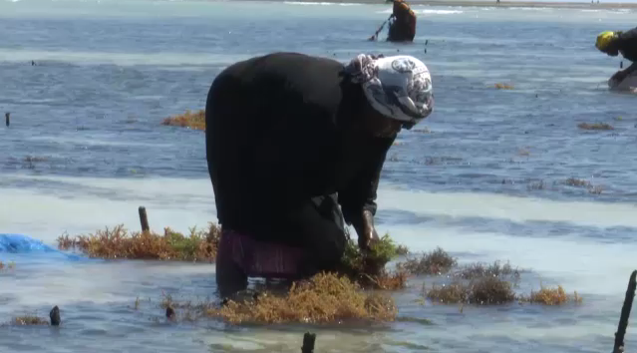 Tanzania: Seaweed sheroes of the coast

Zanzibar, 5 August – Zanzibar is the third largest seaweed exporter in the world after Philippines and Indonesia. Cultivated by more than 25,000 farmers, the crop ranks number three in foreign currency generation on the southern African island. Seaweed farming in Zanzibar produces about 15,000 tonnes annually and more than 90 percent of its farmers are women.

These figures are evidence of women’s great contribution towards economic development in the area. They also show the effort women put towards achieving economic independence. However, many of their stories are scarcely told or celebrated. In Tanzania, it is not uncommon to find  men recognized for their contributions towards the economy while women are side lined. Many stereotypes dictate how women’s stories are told as society is yet to believe that a woman can greatly affect the economic development of the country.

Seaweed farming is a trade that many women farmers on the coast of Zanzibar have grown to master, as it is one of the most profitable small-scale businesses on the island. Unfortunately, many of these dedicated women are not fully equipped to effectively use their efforts towards becoming economically independent and empowered.

Women in Zanzibar often juggle between providing for their families and bargaining for a reasonable price from local businesspersons who buy the seaweed from the women at a much lesser price than it is sold on the international market. The challenges met by female seaweed farmers are overly under emphasized just as much as the women’s contribution in economic development of the country.  The story initially set out to question government’s efforts in empowering women who engage in seaweeds farming.

The bigger picture however, focused on ensuring women’s full and effective participation in  leadership. Beyond improving the lives of the women and those close to them, seaweed farming greatly affects the community and the country as a whole and it is important to recognize the contribution of women.

Many women in seaweed farming do own assets in the industry but constitute a great part of the small scale suppliers of the produce, the goal of telling the story was to call for reforms that will give women equal rights to economic resources, as well as access to ownership and control over land and other forms of property.

Following the release of the story, the government of Tanzania took a step towards supporting seaweed farming. It also influenced the implementation of initiatives such as construction of a seaweed processing company on the island.  The government renewed its commitment to empowering small-scale business women and expressed the will to be accountable to the promise.

The documentary was produced by gathering data through interviews with reliable sources and capturing of seaweeds farming and business activities. This story had seven sources including three females and four males. Seaweed is an edible plant used in toothpaste manufacturing, cosmetics, lotions and other medicinal products.

Janeth Leonard is a Tanzanian television producer for Tanzania Broadcasting Corporation. She produced a 15 minutes documentary on seaweed farming in Zanzibar for the Tanzania  Gender and News Summit 2018

Comment on Tanzania: Seaweed sheroes of the coast Cancel reply