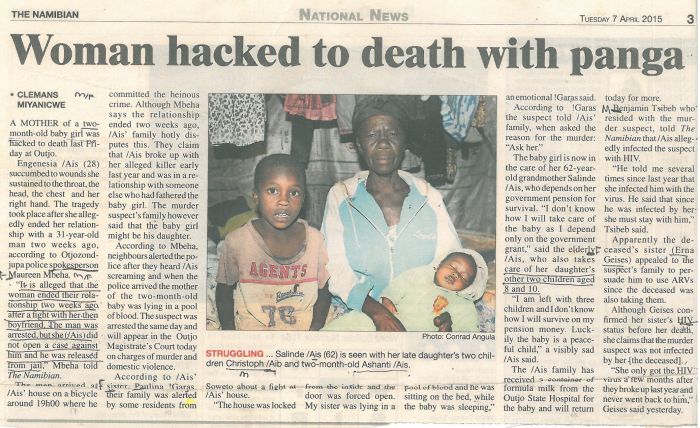 Name of article: Woman hacked to death with panga

Name of Publication: The Namibian

In the article, the accused claimed he was infected by the victim. It gives a mind-set that women are the carriers of HIV, which is not always true. Giving HIV a woman’s face. Also not including what action the law has taken against the accused paints a picture that suggests that people can get away with such atrocities. It gives women a mentality that reporting gender violence cases is futile an giving your story to the media is equally damaging as it will publicise many other areas of your life you do not want people to know.

Headline: It fairly reflects the essence of the story. On the other hand, both the victim and perpetrator could have been included in the headline. This will expose and highlight the kind of power relations that exist and shed light on perpetrator. It can allow the story move away from the narrative of the female victim and the faceless perpetrator.

Sources: Story has five sources. Four are women and one is male. No balance in the story. It illuminates the idea that more women talk in issues of gender based violence more than men. The women are sad as they explain what happened and the suffering they faced after the tragedy.

Visual images: accompanying the story exposes the sombre mood in the family. Showing a helpless women and grandchildren. The picture maybe be deemed insensitive to the minors who might face discrimination in the community because of the exposed ‘HIV status’ of the mother. Although the picture might also be argued to be attempting to reflect the dire situation and burden the children and grandmother are left in. A picture of the accused could also be used as he

Story angle and perspective: The voice of the suspect is missing. Subject should be both the victim and the perpetrator but the victim is talked of more in the article. More needed to be shed on the perpetrator. The writer should also have put context to the story giving prevalence rates of GBV in the area or in the country at large or highlighted if any other such cases had happened in the area before.