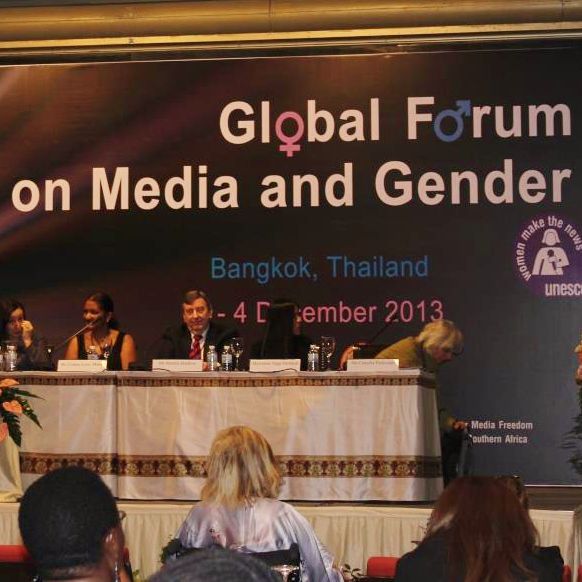 Bangkok, 4 December: Educating journalism students about the importance of reporting on gender is the best starting point to change the ways media portrays and reports on women and gender, according to a the Global Forum on Media and Gender underway in Bangkok, Thailand.

“Not only does it make sense that these institutions prepare students for a professional career in journalism but it also makes sense to teach children from a young age that there is equality between sexes. They should produce, use and distribute media messages in a way that communicates equality to various audiences,” said Elaine Steyn from the University of Oklahoma.

The study found that men constitute 62% of media education and training staff in the region, compared to 38% women, yet women are the majority of media students at 61% versus 39%. This ratio of male to female staff and students is inversely proportional, and suggests that there is a need for more female academics.

The study demonstrates how gender parity amongst lecturers and gender mainstreaming in media education curriculums is crucial for students’ careers as media producers and even more important for audiences consuming these products.

Emily Brown, Head of the Media Department at the Polytechnic of Namibia and Deputy Chair of Gender Links explains that gender mainstreaming in media training is important at both a theoretical and practical level. “At the Polytechnic of Namibia we try to create a balance between theory and practice. Our campus media outlet fosters freedom of expression, diversity, non-discrimination, gender equality and accurate and balanced reporting. We want to give a voice to the voiceless, the people who are never sourced.”

Media training institutions also block social media platforms such as Facebook or twitter, rather than incorporating these new platforms into the practical assignments. New information and communication technologies (NICTs) are the future, and in fact very powerful platforms for citizen journalism and information dissemination.

Educating and empowering students on the ethical use of NICTs is crucial to their journalistic careers. Journalism training institutions now have an added role to teach students about engagement online and new media journalism.

Media production is not an objective process. It is informed by the personal values and ideas held by each media practitioner. Therefore, changing students’ gender attitudes is a priority, because these ideas eventually infiltrate newsrooms, editorial content and ultimately society’s mindsets. Unless media education institutions do not take the lead in teaching the standards of ethical, balanced and gender sensitive journalism, gender stereotypes and gender insensitive reporting will persist.

Tarisai Nyamweda is the Media Programme Officer at Gender Links. This article forms part of the Gender Links News Service special coverage of the Global Forum on Media and Gender, currently underway in Bangkok.