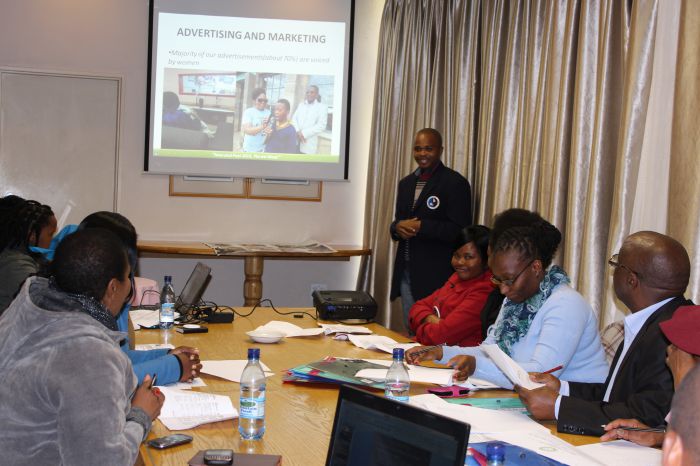 Maseru, 10 June: The Lesotho Gender Protocol@Work Summit kicked off yesterday and participants from various sectors held presentations on the work they are doing to achieve gender equality and justice. The Summit has brought together emerging women entrepreneurs as well as gender drivers of change from local government; media; faith-based organisations; the climate sector and other civil society organisations.

The Summit serves as a valuable platform to recognise the positive change that is taking place in our communities. Participants began their presentations yesterday after the opening ceremony, following pre-judging on Monday.

Manoosi Khetsi, a councilor from Likila presented on her work and engagement in the community after undergoing training with Gender Links through the local government Centres of Excellence programme, where councils are trained on gender mainstreaming in governance.

“I was working at the Independent Electoral Commission (IEC) where I had noticed that men were more engaged in politics than women. The minute I got introduced to Gender Links, I acquired information which empowered me as a woman and from there I approached other women based on the knowledge I had and that became a route of empowerment where I found myself as part of the council,” explained Khetsi.

Khetsi also added that she and the council formed support groups for both men and women in the community to ensure people understand the importance of gender equality and women’s rights.

Matseliso Mapetla, a political science lecturer at the National University of Lesotho who was judging at the summit said she can she progress and improvement in the level of gender mainstreaming work. She was happy to note that participants were interested in starting support groups for empowering women in their communities.

Mapetla was also impressed by the way in which faith-based organisations are working together with both men and women to encourage equality. “Men and women have began to see and acknowledge their positions within the community and families, of which it shows that the gender equality message is effectively reaching out to the people and bringing the expected change,” she said.

Media is also playing a part in creating awareness among Basotho men and women regarding gender equality and justice. Based on the presentations, broadcast as well as print media have gone to great lengths to ensure women are aware of their rights.

Broadcast practitioner- Lintle Ramatla, pointed out that one of the radio shows she produces on women’s empowerment, encourages men’s participation. “The radio shows tackle topics on what is holding Basotho women back in standing up and doing things for themselves. I have had incredible feedback on women getting out of their comfort zones by getting jobs or even becoming entrepreneurs…women are beginning to understand that they also have a say in the development of their country and families,” she said.

Many participants spoke of how the work Gender Links is doing has brought about a positive change in their lives and how they respect other people regardless of their gender.

Matokelo Damane, a representative of Mafeteng Urban Council said, “Since the intervention of Gender Links on women’s equality I for one as an individual have changed remarkably in how I viewed other women who are less privileged and that by empowering them I also empower myself.” Damane also emphasised the need for people to understand that women should not be discriminated against and are more than capable of doing any job.

The presentations continue today, and judges will the tally up the final scores to establish the winners of this year’s Summit. Gender Links and the Alliance will then award the gender champions for their work in advancing gender equality.

This article is part of the Gender Links News Service special coverage of the SADC Gender Protocol Summits underway across the region, offering fresh views on everyday news.