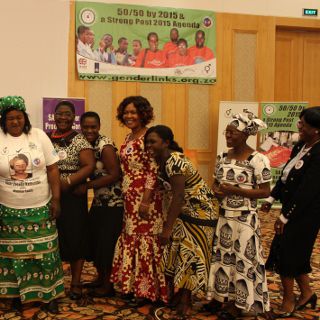 Lilongwe, 1 May: The NGO Gender Coordination Network, United Nations and the Malawi government have called upon leading institutions in Malawi to make decisive strides in promoting and implementing affirmative action in order to achieve 50% representation of women in politics and decision-making by 2015. Speaking at the official opening of the SADC Protocol@Work Summit in Malawi, Principal Secretary in the Ministry of Gender, Children and Social Welfare, Dr. Mary Shawa commended the country for putting in place policies and mechanisms to improve the lives of women in the country.

However, women still encounter enormous challenges that limit their meaningful participation in all domains of life.

“When you look at the 28 targets of the SADC Gender Protocol, Malawi is not going to reach most of the targets by 2015. This situation is not only peculiar to Malawi, but most SADC states. However, Malawi still has an opportunity to attain 50% representation of women in politics when it goes to elections later this month,” said Shawa.

The SADC Protocol@Work Summit is important as it provides an opportunity for the country to monitor the implementation of the SADC Gender Protocol.

In her speech, Emma Kaliya the chair of the NGO Gender Coordinating Network and Alliance focal point in Malawi, said although women make almost 52% of Malawi’s population, their representation and participation is very low in important spheres of life like education and governance.

“In many parts of the SADC region including Malawi, girls do no attend school as they are simply challenged by gender roles such as fetching water which boys do not do,” Kaliya said.

Representing other leading institutions in the quest for gender equality and justice, UN Women representative, Alice Harding-Shackelford, commended the work that Gender Links and the Malawi government have taken in promoting women’s participation in all domains of life. She advised delegates to seriously consider including gender in the post-2015 global agenda, as opposed to the positioning of gender as a mere crosscutting issue in development.

Dr. Francis Chikunkhuzeni, a lecturer from Malawi Polytechnic said that the media are key partakers in promoting women’s participation in development. Currently over 12 media houses in Malawi have gender policies that guide professional conduct. The media has done tremendous work as representation of women in media has increased over the years.