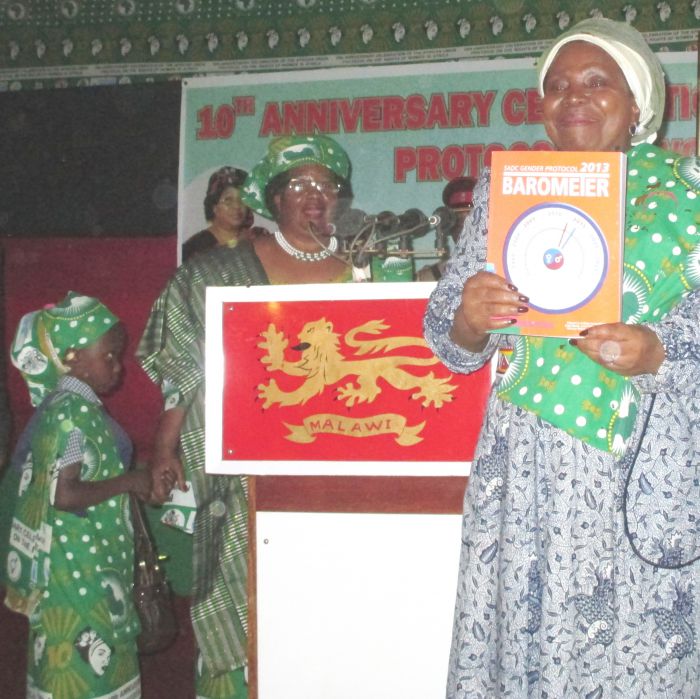 The SADC Protocol on Gender and Development has now come into force in Malawi following President Joyce Banda’s recent ratification of the instrument.

The Protocol was signed by the late former President Bingu wa Mutharika in 2009, though ratifying the protocol was delayed due to a strained relationship between his regime and civil society organisations.

Principal Secretary for Gender Children and Social Welfare Mary Shawa confirmed that President Banda ratified the protocol in February, with government finalising the documentation in April this year.

Gender Coordinating Network (NGOGCN) Chairperson Emma Kaliya has since applauded Malawi finally ratifying the protocol. Kaliya described the development as a step in forward in achieving gender equality in Malawi.

With over a two-thirds majority of SADC states having ratified the Protocol, member states are legally obliged to mainstream gender at all levels and to incorporate the provisions of the Protocol into domestic laws for application. This affirmative action will see an increased accountability on the part of governments on issues of gender equality at both domestic and regional levels.

United Nations Population Fund-Malawi representative Gift Malunga says, “This is a welcome development that will allow Malawi and the rest of countries in SADC region to move as a block to ensure that they address the issue of equality of men and women as a whole”.

The SADC Protocol on Gender and Development includes 28 targets that member states must commit to by 2015 in order to achieve gender equality. By creating common formative standards, the Protocol should empower policy makers, service-delivery institutions, human rights activists and beneficiaries with the legal tools to demand and claim gender equality.

SADC member states signed the Protocol at the 2008 SADC Regional Summit in Johannesburg, South Africa. Thirteen out of 15 countries have now signed. Botswana and Mauritius have not however are showing positive signs that they may soon do so. With Malawi being the latest signatory, 12 countries have ratified the protocol, with only the Democratic Republic of Congo having still needing to ratify.

Rebecca Chimjeka is journalist for Joy Radio, a Media Centre of Excellence in Malawi. This article is part of Gender Link’s Opinion and Commentary Service special coverage of SADC HOS Summit in Malawi, offering fresh views on everyday news.