CSW Column 1 South Africa: If you’re here, you are a winn... 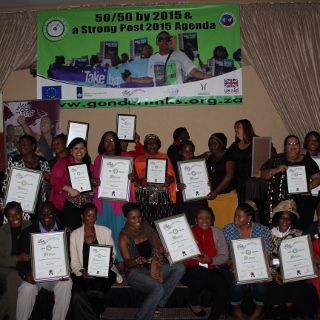 South Africa: If you’re here, you are a winner!

Johannesburg, 25 January: The curtain on the South Africa Southern African Development Community (SADC) Protocol@Work Summit came down yesterday with an award ceremony at Kopanong Hotel in Johannesburg. Gender Links awarded seven winners who presented best practices on how they are implementing the provisions of the SADC Protocol on Gender and Development. All winners will go to the regional summit.

Thoko Mpumlwana, deputy chairperson at the Commission on Gender Equality and Gender Links board member gave the keynote address, which emphasised the importance of using the platform to network. She went on to comfort those who were not getting awards and said, “The fact that you’re here, means you’re a winner already”. To the winners of the country summit, she encouraged them to prepare for the regional summit and make the country proud.

“There are more tuck shops owned by women and we have created jobs in our communities. When municipalities build a shopping complex, women should move into the complex and own retail stores. Women should be educated and encouraged to put more effort in their businesses and aspire to turn their tuckshops into retail stores and big enterprises,” she concluded to a loud cheer.

Awards were given to the following:
– Shumani Cynthia Siphuma, Chief Executive Officer of South African National Association of the Blind and partially sighted Persons (SANABP) from Capricorn district walked with the Health, HIV and Aids award. She thanked Polokwane Municipality for support. “I will push forward gender equality and always make sure that disabled persons are included in projects,” emotional Siphuma said.
– Mossel Bay Municipality walked with Climate change, GBV and leadership award. Alma Kritznger of gender disability, elderly and HIV/Aids officer said it is a payoff for hard work when you compete with big giants such as Capricorn District.
– Economic development was Doris Mthethwa who heals from Kwa-Zulu Natal. She thanked God for the strength she receives daily and making change in people’s lives.
– Constitutional and legal rights, winner Yoliswa Mamela from Eastern Cape.
– Maths Genius Leadership institution walked away with the education award which was received by the Director, Edzai Zvobwo.
– Charmain Carrol won the Photojournalism award while Suzan walked with Emerging entrepreneur awards
– Capricorn District won the Local Government COE award.

Comment on South Africa: If you’re here, you are a winner! Cancel reply