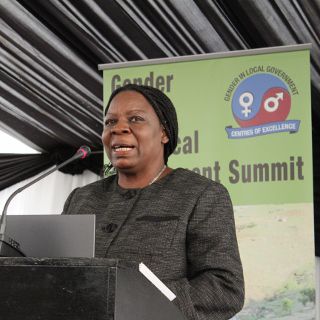 Southern Africa: Constitution-making a ray of hope for gender equality

Johannesburg, 29 May: Lack of political will has been pointed out as the major hurdle in the implementation of the equal representation of women and men in decision making bodies in Southern Africa as proposed in constitutions and the Southern Africa Development Community (SADC) Protocol on Gender and Development. This was said by presenters at the plenary session on 50/50 at day two of the SADC Protocol@Work summit which has just ended in Johannesburg, South Africa.

The Mauritius Minister for Gender Equality, Child Development and Family Welfare, Honourable Mireille Martin said women that contested for political positions are still not judged by the qualifications and merit they possess but by their sex, despite the number of women increasing from 6% to 24% in the last local government elections.

Despite plans by the Mauritius government having plans of replicating gender proportion legislation at local level into national elections, women still had to face an electorate that had low political will to out in place mechanisms that encourage women to contest in elections.

Sharing experiences from the constitution making in Zambia, Matrine Chuulu, Executive Director of Women and Law in Southern Africa (WLSA) said proposals to include proportional gender representation in the new constitution was contested by other groups. Further, she expressed her dismay at government for failing to deliver a new constitution even nine months after it came in power in 2011. The ruling party had promised a new constitution during the election campaign.

Chuulu said despite the constitution making taking a long time, women’s groups in Zambia had not lost hope and they rallied behind the Ministry of Gender to ensure that 50/50 gender representation is enshrined in the new constitution.

“We had a slogan that if proportional gender representation does not go through then the proposed constitution won’t see the light the light of day,” said Chuulu.

Virginia Muwanigwa, Women’s Coalition of Zimbabwe board member corroborated experiences from Zimbabwe adding that political parties did not respect their set gender quota in elections and women that showed up to contest for positions faced stereotypes from the general population despite the constitution in Zimbabwe guaranteeing proportional gender representation.

Muwanigwa said, “when we were collecting views for the constitution, some male citizens supported 5050 representation for business positions, but were reluctant to accept it in political positions.”

However Muwanigwa noted that despite the numerous challenges that women face, under the new constitution the proportion of women had increased because of the reserved 60 seats in parliament that saw the percentage of women increase from 12% to 34% in the lower house and 48% of women in the senate. This is an example that Zambia and Tanzania that are currently writing new constitutions should emulate.

Msoka said the draft constitution in Tanzania had a clause that would ensure gender balance in parliament by having male and female member of parliaments in each constituency in the country, however she was quick to point out that women politicians had to break the glass ceiling in their parties and the community to succeed in politics.

“Women are still viewed as mothers, people without proper education and experience. They are judged without getting the chance to show to the members of the public that they can perform just like their male counterparts,” explained Msoka.

She further added that gender in the constitution was still limited to parliament positions and other important elements of gender equality were left out, a view that was shared by Muwanigwa who said that key issues like land ownership, mining, indigenisation programs and many more leave out women.

Mulemwa Thomas Mulemwa is a student at the University of Dar es Salaam. This article is part of the GL News Service special coverage of the SADC Gender Protocol Summit underway at Kopanong Hotel and Conference Centre in Johanesburg, South Africa, offering fresh views on everday news.