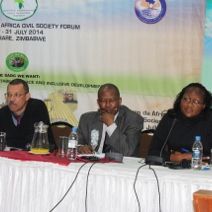 Harare, 30 July: The 10th SADC Civil Society Forum came to an end today with NGOs and civil society groups tabling their different recommendations for the ‘SADC We Want.’ These recommendations are then discussed by members to decide whether they will be included and adopted in the SADC civil society communiqué to be presented to SADC Heads of State in August.

Speaking at the closing ceremony, Southern Africa Development council-Council of Non-Governmental Organisations (SADC-CNGO), Executive Director Biochoko Ditlhake said the adopted recommendations will represent collective position of the regional civil society sector, as they pursue sustainable development in the region. This year’s forum ran under the theme, “acting together for accountability, peace and inclusive development.”

Several participants spoke about the need to include put principles of participation, inclusion and negotiation, to ensure SADC becomes a better place where different people can enjoy different freedoms, liberties and the fruits of development. Many participants were concerned with the persistent exclusion, marginalisation and discrimination girls and women. They advocated for the need to ensure ministries dedicated to gender equality.

The SADC Gender Protocol Alliance also provided their recommendations to those drafting the SADC Civil Society Communiqué, in which they urge SADC governments to recognise that achieving gender equality is fundamental to the development of the region. As such, the Alliance calls on heads of state to accelerate implementation of the SADC Gender and Development Protocol, which 13 of the 15 SADC countries have signed, to ensure progress in meeting the targets by the 2015 deadline. Furthermore, the Alliance appeals to member states to commit to the reviewing of SADC Gender Protocol targets for the period 2015 to 2030, calling for a stronger post 2015 gender equality agenda.

Forum participants also agreed that the provision of financial and technical support to various regional women’s groups was important so they can successfully advance their initiatives and to ensure they are successful in making an impact at all levels they work at.

Turning to informal trade, the forum recognised the importance of cross border traders of which 70% are women in the SADC region, and the informal sector generates an approximate US$ 7 billion per year. During a question and answer session, several participants also said that they are alarmed by the lack of progress in the economic sector saying that levels of unemployment, poverty and inequality are worsening. Several participants agreed that facilitating women in trade and economically empowering women will contribute to poverty reduction and development.

Christopher Mutsvanngwa, the Zimbabwe Deputy Minister of Foreign Affairs gave closing remarks saying that the development of SADC relies on home grown solutions to Southern African specific challenges. He added that Africans should have business minds to create wealth and capital and urged the civil society to work for towards regional wealth.
“The NGO’s are playing a crucial role in championing for social, political and economic change in the region through actively involving people in their development initiatives,” said Mutsvangwa.

Fellowship of Christian Councils in Southern Africa (FOCCISA), Chairperson Reverend Solomon Zwana also gave a moving speech in which he predicted a SADC that is prosperous if member states work together to achieve an inclusive, participatory and local solutions to different problems affecting the region.