CSW Column 1 Tanzania: Media urged to be agents of change... 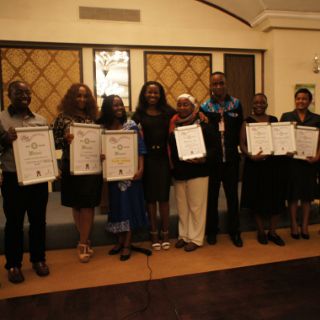 Tanzania: Media urged to be agents of change

Dar es Salaam, 1 May: The second Tanzania SADC Protocol@Work Summit came to a close on 28 May with a colourful award ceremony held at the New Africa Hotel in Dar es Salaam. This year’s summit featured 40 entries from media houses and civil society organisations in a variety of categories including Media Institutional Centres of Excellence (COEs), leadership, Alliance and coalition building and media content.

During the opening of the awards ceremony, media practitioners were urged to foster gender equality in their institutions despite the challenges posed by ownership patterns.

In her closing remarks, renowned Tanzanian gender activist, Salome Anyoti highlighted that the media has a crucial role to play in ensuring that Tanzania attains gender parity in line with the international instruments the country has signed.

Anyoti said that the media should also begin to formulate programmes that should challenge stereotypes as well as cultural beliefs that hinder the countrys’ progress in attaining gender equality.

“The media has to assist in changing attitudes and beliefs that gender is only a woman’s issue. In the past men that spoke about gender were often misunderstood and had to face many questions from their peers, but we can see changes. Young men have joined the struggle for gender equality. Without the media this would not have been attained,” she said.

Semakafu noted that during the constitution assembly held in Dodoma earlier this year, male reporters from community radios took the initiative by starting special programs that dealt with women’s issues, a move that signalled the departure from the old reporting style that stereotyped women.

“In the past women only appeared in stories where they were depicted as victims, but there is now progressive coverage in the media,” Semakafu said.

However the judges called for more commitment and a sense of ownership from media houses participating in the Centres of Excellence (COE) process. He commended the efforts and enthusiasm shown by some of the entrants in this year’s competition.

“The turn up by media houses for this year’s summit was not quite impressive; we received only eight applications but only three media houses turned out to present their best practices. This is a sign that media houses are not taking ownership of this process,” said Dominica Haule, judge in the Media Centres Of Excellence category.

The winners are scheduled to make presentations at the regional summit to be held in Johannesburg at Kopanong Hotel and Conference Centre from 26 to 28 May 2014.

This article is part of the GL News Service special coverage of the SADC Gender Protocol Summits underway across the region, offering fresh views on everyday.

Comment on Tanzania: Media urged to be agents of change Cancel reply