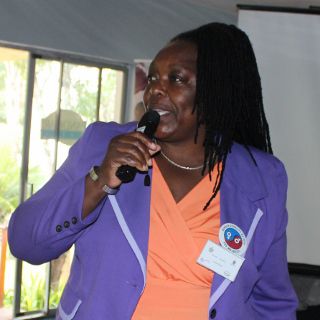 Zimbabwe: Does economic independence reduce the levels of GBV?

Harare, 16 April: “Ever since I started making my own money, I have stopped begging my abusive and promiscuous husband to love and care for our children.”

These were Xolani Chikwekwete’s remarks, a beneficiary of the Gender Links Entrepreneurship Programme for Gender Based Violence (GBV) survivors aimed at testing whether the economic dependence of women increases their vulnerability to abuse.

Speaking during the two-day Zimbabwe SADC Protocol Gender Summit in Harare, Chikwekwete who is from Gweru, in the Midlands province, says the skills gained through the programme had given her another chance in life.

“I am a 29-year-old mother of four children, a GBV survivor from Gweru. I am uneducated and for many years, I put up with my estranged husband’s abuse because he was my only source of income. He would cheat on me and refuse to give me money for anything whenever I questioned his promiscuity. He eventually dumped me for another woman and I was left alone with the children.

“I struggled with the children until I went back to my rural home. Life was very hard and when I had lost all hope, I heard about the Gender Links programme for GBV and from that day I have never looked back,” she said.

She adds that her participation had afforded her a chance to stay in hotels, something she never envisaged in her life as a housewife.

“The training sessions afforded me a chance to stay in a hotel, something I had always dreamt of. For the first meeting, they gave me $75 as transport allowance and I saved that money and started a business which has grown to something big. I am happy because I can now afford to take care of my children. I now pay their fees, medical bills and I am renting a flea-market. I get $100 as maintenance from my husband which is not enough but through the entrepreneurship programme, I am now able to make my own decisions and can never take abuse from anyone,” says Chikwekwete.

Thandiwe Mlobane, the Entrepreneurship Programme Facilitator, applauded Gender Links for giving women a chance to rise from their misery and to use their skills in alleviating poverty.

“I have worked with more than 70 GBV survivors so far who have been trained and empowered through life and applied entrepreneurship skills. We have, indeed proven that women who are financially independent are less likely to tolerate GBV and they are in a better position to negotiate for safer relationships.

“Almost all of the women trained are running their small businesses. By economically empowering women, we are giving women the power to make choices to stay or leave abusive relationships. I urge other women in Zimbabwe silently enduring GBV to seek counselling and to approach their local authorities who can help them register for this countrywide programme,” she says.

Mlobane, who is also a business consultant, says “Women who benefited from this programme are now confident and there is a notable increase in their esteem compared to when they signed up for the programme. I hope other women will be motivated to rise and empower themselves through entrepreneurship.”

Chegutu Municipality Director of Housing, Health and Community Development, Melania Mandeya says an increase in the number of financially stable women will reduce GBV cases, contributing to one of the targets of the SADC Gender Protocol.

“Entrepreneurship is a solution to high levels of GBV faced by our country despite the fact that we are left with only this year to halve GBV as stipulated in the SADC Gender Protocol.”

“This programme is a great initiative to motivate women to stand on their feet and grab opportunities as they come. Women who benefit should also go back to their communities and inspire thousands of other women who are suffering in silence,” says Mandeya.

Gender Links launched the programme as a response to a survey, Peace begins at home, which found out that women stayed in abusive relationships because they do not have a source of income to fend for their children and themselves. The programme will see the training of GBV survivors on entrepreneurship in 100 councils in ten SADC countries and, through the local authorities, link them to local economic development opportunities.

Through the entrepreneurship, training Gender Links will also test the hypothesis that economic empowerment increases women’s agency and self-actualisation thereby increasing their ability to negotiate safer relationships and or to leave abusive relationships.

The two-day summit is running under the theme 50/50 by 2015 and demanding a strong post 2015 agenda. It will culminate in national awards recognising excellence in various areas including women’s rights; local government; emerging entrepreneurs; government/leadership; gender based violence; climate change; media content; and 50/50, Alliance and Coalition Building.

Comment on Zimbabwe: Does economic independence reduce the levels of GBV? Cancel reply