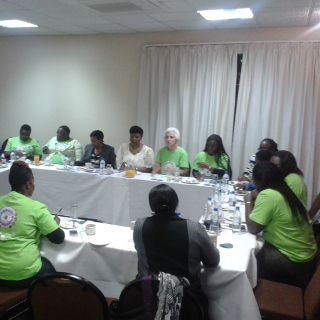 Harare, 29 July: After Zimbabwe Minister of Women Affairs, Gender and Community Development, Oppah Muchinguri, launched the 2014 SADC Gender Protocol Barometer on the eve of the 10th Southern African Civil Society Forum on Sunday, Gender Links and the Southern Africa Protocol Alliance met with Minister Muchinguri. Members of the Alliance shared their country specific gender priorities that they would like her to convey to the incoming chair of SADC- President Mugabe. The Alliance hopes that as the next SADC chair, Zimbabwe plays a leading role in encouraging SADC states to speed up efforts to meet the SADC Gender Protocol targets before 2015, and to push for a stronger post-2015 gender framework.

Gender ministers meeting in Lilongwe, Malawi on 25 July ahead of the SADC Heads of State Summit noted that the targets will need to be reviewed in line with the global post 2015 agenda. The 2014 Barometer focuses on the post 2015 agenda, suggesting several areas in which the Protocol can be strengthened in the period 2015 to 2030. Alliance Chair Emma Kaliya stressed that: “We are counting down to 2015. We must not let up the momentum. At the same time we must plan, re-strategise and reprioritise for 2030, in line with the global agenda. We are called upon to revision our future direction in line with the draft Sustainable Development Goals…voice, choice and control are the key watchwords in the post 2015 gender agenda.”

In the bilateral meeting Minister Muchinguri expressed her continued commitment and collaboration with civil society to advance gender equality in Zimbabwe and the region as a whole. The Minister invited the Gender Alliance for a follow-up meeting today, to discuss the next steps and proposed areas of review for the post-2015 SADC Gender Protocol

This podcast is part of the GL News Service special coverage of the SADC Civil Society Forum underway in Zimbabwe, offering fresh views on everyday news.