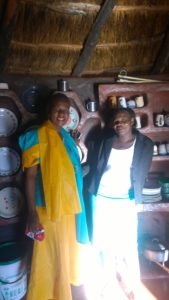 In the communities that I work for, in my ward, I have been able to gather and establish projects that help capacitate women and empower them. I have trained women and girls from my own personal skills in projects that include interior décor, cutting and designing, dress making and urging them to venture in chicken keeping projects and other farming activities. All these projects I facilitated myself. I have always been keen on issues of empowerment, health, development and education from my upbringing. For the past few years I have been running as a Councillor I have been able to a voice of my community and help them develop. I have helped in development of four primary schools in my community, Mdudla, Makhokhomba, Joana Fuyana and Mazizini Primary Schools.

I grew up with my brothers and sisters and in the family there was never a woman’s chore or a man’s chore. My brother used to bake and I used to keep chickens and goats. We were taught to be entrepreneurs and independent a tender age. The other side of my family was bitter. I experienced gender discrimination and a form of gender based violence. The most painful phenomenon was when my father beat up my mother because she wanted to take my sister, to secondary school. The mentality was so bad that my father believed that girls should not go further than primary school education. When I was voted to represent my community as their councillor I grasped the opportunity with both hands and it was going to help me tell my story and empower other women who grew up in the same situations I did.

The main base of my work is to be the voice of my community. I advocate for rights, safe environment, healthy living standards, empowerment of women, education, and the 50/50 representation of women and men in the decision making and policy making posts. I hope to create as much change as possible during my term in office and as a woman in the society.

The most challenging factor as woman in leadership or in politics is the management of time. As a full time mother and grandmother, I am also a farmer, a community leader, a musician, a designer and tailor by profession. All this, take up most of my time but as a leader I strive to give the best quality time to all my responsibilities. A majority of men do not want to be led by a woman in their communities and this increases the vulnerability of women to be the subject of abuse be it verbal, physical or emotional. Most women lack an educational capacity and this hinders them from being empowered and capacitated. Women do not have a strong support system for each other and this develops a “pull her down syndrome” within their own communities. Unlike in male congregations, men have a stronger support system for each other.

I do not claim to be a driver of change but l am one, also l do not claim to be a Gender Champion but it is in my blood. l am a fully capacitated and empowered woman and strongly believes that every other woman deserves the same. Motivation and inspiration came from my sister, a Co-founder of Baobab Strong which is an organization that helped our community build a secondary school and donates groceries every Christmas time to elderly and people living with disabilities. She has been my role model.

Championing gender has made me a better mother, a better grandmother and a better version of myself. I do not want to be associated with failure so I made it a point that every dweller in my home is capacitated, empowered and has some skills so that they are independent. The training and projects I have taken part in have helped me to manage my time and also I have taught others about multi-tasking and time management. The next step I would like to take, for future, is to open a Women Resource Centre that will be in for capacitating and empowering women so that they are able to advocate for 50/50 representation in decision making posts.