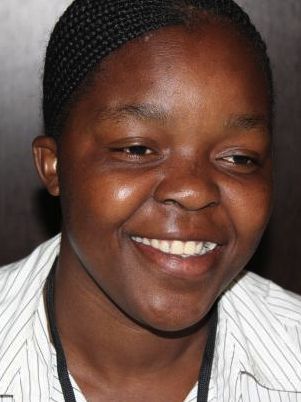 For many girls and women out there, poverty and gender violence take a blame for incarcerating them in a despondent situation. They say they could have succeeded in life if they had enough things, such as a better home. However, the story is different for Alefa Lyson. She is only 25, and besides heading the gender reporting desk at Power 101 radio, Lyson is a brain behind a number of gender related programmes at the radio station.

But before delving deeper into her “making a difference” career, perhaps it is worth knowing what influenced her to venture into journalism and media as opposed to other professions.

“I am a product of other people’s passion who saw the potential in me and encouraged me to work hard against all odds”, Alefa say when asked what has brought her this far.
Alefa says that she grew up in an abusive family because of her father’s machismo. She says her father thought as a man and a breadwinner of the family, he had the right to do everything he wanted. “He could have as many girlfriends as he wanted, and he cautioned my mother not to dare question him about his irresponsible behaviours or they would divorce,” she says. Nevertheless, they divorced. “Since the role of raising children is culturally accustomed to a mother, I together with my other four siblings, went to the village with my mother. Besides, our father would not have accepted that we should stay with him.”

“Life in the village was very tough compared to the city [Blantyre] and I never liked it. I really wanted to stay in town and have a better education, but the circumstances never permitted me to. However, some people saw the potential in me and advised me to work hard in school so that I could someday find myself a better job and stay in town without depending on someone else”, narrates Alefa.

The young journalist says what motivated her most was the circumstances she grew up in. “My mother was abused and forced to go to the village because she did not go to school and she depended on my father for everything. Every time the abusive life we went through crosses my mind, I worked extra harder in school to find myself here today.”
It is for this reason that she believes that there are many girls out there who have given up on their lives because of similar circumstances, hence she is thinking of better ways to help them.

“I deliberately chose to study and work in the media because I have always wanted to share my story and inspire other girls who might be going through tough situations like the one I went through. I believe the media has the power to inform and inspire people and I wanted to use it in this regard.”

It is no surprise therefore that Alefa has pioneered gender related programmes in the media houses she has worked for. Currently, Alefa is the head of gender reporting desk at Power 101 and the host of Mlatho (bridge) feature programme. Mlatho, her brainchild, is a radio feature programme that is meant to inspire and find opportunities for a needy girl child in Malawi.

The passionate Alefa says there are many girls out there who are failing to realise their potential in life because of a lack of information and inspiration. This, she says, is what made her to think of coming up with a programme that could bridge (mlatho) the needy girls to a world of opportunities. The programme which started in July 2012 features prominent female experts and models who discuss how needy girls can overcome many things that could stop them from succeeding.

Alefa says working with Gender Links has equipped her with numerous gender sensitive skills that are impacting positively on her career goals of empowering a needy girl child.

“For instance, I can now explain to my audience the difference between gender and sex and through my programmes and news reporting, I am able to articulate gender issues very well to avoid confusing people. I feel that the media is partly to blame for creating a gender resistant society because of poorly crafted gender messages,” argues Alefa. She says the media should desist from presenting gender issues as a fight between men and women. “Gender is about creating equal opportunities between men and women.”

Simion Shumba, Power 101 Head of News describes Alefa as a budding female media practitioner who is set to make a difference. He further says Alefa possesses qualities that many female up and coming journalists do not have. “For Alefa, learning is a lifelong process and she is willing to learn every day. On the other hand, she is quick to admit whenever she has made mistake and this creates room for her to learn more”.

Alefa says that what depresses her most is that she is unable to trace the girls she features in her programme because they live in the streets and do not have contact details. For instance, late last year she managed to find a person who was willing to sponsor one of the girls she featured in the programme, but she could not connect her to the well-wisher.

“The girl’s name is Praise Kanyoma and she was 16 at the time of the interview. Her parents married her off when she was 14, but the marriage did not work out. She divorced and remarried and now she has a child but things did not work as well.

“The girl expressed an interest in going back to school if someone would sponsor and fund her studies. Luckily, a well-wisher contacted me, and said that he would like to sponsor that particular girl, but I can’t find her”, lamented Alefa.

In wanting to reach out to as many girls as possible, Alefa would like to secure funding and take her programme to the remote areas of the country as opposed to interviewing girls from Blantyre as it is the case currently. Her dream is at least “to fish out that brilliant girl trapped in poverty and patriarchy and enable her realise her potential.”

Alefa, who is currently struggling to complete her diploma in journalism at Blantyre Business College due to lack of finances, has also worked for Joy television, the first privately owned television station in Malawi.