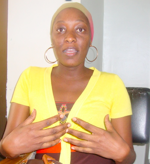 In 2006 when Amana Nyembo joined Free Media Limited as a correspondent, she never imagined she would rise to become an editor. In an industry where men dominate and command a lot of influence in determining who becomes the editor or manager, elevation to an editor position was like a dream come true. However, Nyembo’s rise to the features editor position was not by accident. She had worked extremely hard to show that even women are capable of delivering the same results as men.

At that time, issues of gender and how they play out in the content and structures of the media were not very clear to her. “It never crossed my mind that I needed to interview both women and men for my stories. My focus in those early years was delivering a story, without regard to the gender of the sources. The story determined who I was to speak to,” she recalls.

But things changed after attending a workshop organized by Gender Links on Gender mainstreaming in media content. “This training had a complete transformation on me. I started interrogating the stories I was doing, how I was doing them and who I was sourcing information from. I also started to question certain decisions and the distribution of women and men in the company structures,” says Amana. “I came to appreciate that we were hurting one gender in the way we covered our stories. I decided to change.” Amana notes that since then, she has been doing things differently.

Her passion to promote gender issues saw her appointed as the Gender Champion in the company in 2012. As a gender champion and features editor, she has ensured that gender issues are given prominence in the news content. “Before the training on gender and media, I never took interest in how information was sourced. Reporters used to do single sourcing, and most of the time they would interview male sources. Now when a story comes to me, and it has a single source, I ask the reporter to go back and seek the views of both men and women on the issues. On many occasions I return the story back to the reporters to do them a fresh,” explains Nyembo.

One thing that she is happy about is that during her tenure as the features editor, the newspaper asked her to introduce a column that discusses gender rights issues. This column runs to date. Besides this, every Tuesday when they run business stories, on Thursday education matters and on Friday family and gender matters, a gender angle has to come out strongly. “In these three days I ensure gender perspectives or gender specific stories come out. On Saturday we have a lot of stories focusing on gender based violence.”

Nyembo says what reinforced and cemented this transformations was the Gender Policy which the company developed with the assistance of Gender Links. “This Gender Policy played a major role in my confirmation as an editor and the creation of the human resource department in 2013 because the issues it raised needed such a department to address them.”

She attributes much of her achievement in regard to mainstreaming gender and her performance as woman in a male dominated profession to a very supportive environment in the newsroom. She has won the respect of the male colleagues. “At the moment I am mentoring young women who are entering into the profession in order to build their confidence and improve their writing skills. This will lead to a critical mass of female reporters as well as transform how the newsroom perceives gender issues.”

One thought on “Amana Nyembo – Tanzania”

I know her since 2013,she is a driver of women changes,respect,obedient and loyalty I always put my supports on her