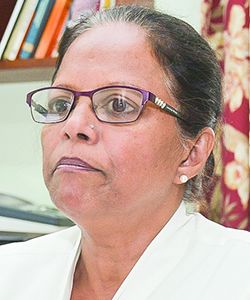 Ambal Jeanne, since her younger days, has been out there on the streets fighting for the rights of students and of women. Driven by the idealistic desire to bring a change in society, she also joined a political party which she eventually left.

Ambal was a public officer for almost 20 years but she decided to thread another path and join another fight, a fight for women. She herself witnessed the sufferings of her mother who was a victim of domestic violence and this pushed her on a journey to reclaim women’s rights. Her mother has been the one who made her into the strong woman whom she is today. Today, Ambal holds the reins of SOS Femmes as the Manager.

On 8th March 1989, Ambal along with a group of women launched a Women’s Advice Centre with the support of Mr Jean Claude De L’Estrac. The Centre offered women a safe space where they could seek advice on their legal, medical and psychological problems.

While working with these women, the team eventually became exposed of a harsh reality which pervades Mauritian society: seven out of ten of the women seeking advice were victims of domestic violence and they often suffered in isolation with no safe space to seek refuge at. There was not a single battered women’s refuge in Mauritius and the team working at the Centre had to continuously send these women back to the violent and unsafe domestic situations from which they were running away. Faced with such brutal reality, the team launched SOS femmes, a non-profit, independent and non-government organisation. Centre Des Femmes eventually became SOS Femmes and one of its main aims is to provide a temporary refuge for battered women and their underage children.

SOS femmes is the only specialised organisation offering a refuge for victims of domestic violence and their children in Mauritius and it operates a telephone service on a 7/24 basis for cases of domestic violence. The NGO also run a nursery and an afterschool care service for its residents and ex-residents on 24/7 basis. It lobbies for laws to protect and promote women’s rights and for non-discriminatory practices against women. SOS Femmes is endeavouring to build a culture of non-violence and gender equality. Ambal believes that this culture can be forged through school-based programmes, community and media interventions, awareness campaigns and stronger legal frameworks.

SOS Femmes has lobbied for the Protection from Domestic Violence Act and has also offered its expertise in the preparation of the Gender Equality Bill.

The fight that Ambal is fighting in a society, which is deeply patriarchal, is long and emotionally strenuous. The day before she came to present her work at the Gender Links Summit, a woman who was badly beaten, came to seek refuge at the shelter. Domestic violence is a reality which cannot be neglected. Ambal believes that even our language is infused with such a violence as swear words target the anatomy of the woman.

To be part of such a fight, compassion and selflessness are of course important but what is also important for Ambal is proper training to be able to work with these women.

SOS Femmes will continue working with all its stakeholders and lobbying the government to provide holistic support and assistance to victims of domestic violence. It will conduct studies to analyse different groups in the society so as to implement appropriate awareness campaigns.

This Driver of Change was collected and written by Vivekah Deerpaul