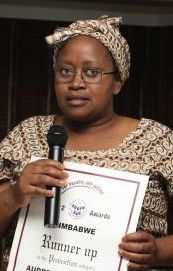 I am a woman from Mashonaland, whose home and life are etched in the City of Kings and Queens Bulawayo, proud to be one of the Queens with a difference. I am the Senior Health and Safety officer for the Bulawayo City Council. I am a lady aged 41 and I hold a degree in Environmental Health. My job entails monitoring public facilities in the city to make sure that they are not health hazards. As a Gender Focal Person, my job is to bring to the fore Gender issues on the council’s agenda, making sure that the council’s budgets and activities also cater to women, youth and children. In addition, it is my responsibility to make sure that I also disseminate information on gender issues to my workmates, friends and relatives.

My first encounter with Gender Links (GL) was in 2009 when they were conducting their Gender in Local Government research in Bulawayo, which culminated in the publication of At the Coalface: Gender in Local Government Zimbabwe. Subsequent encounters with GL was when the Zimbabwe country manager, Priscilla Maposa came to seek buy-in with the Heads of Departments and Town Clerk so that Bulawayo City Council would be included in the Centres of Excellence (COE) program. Following that meeting, several workshops have been held with GL, since the Bulawayo City Council is now one of the councils in the COE program. We recently held a workshop with GL to amend the council’s Gender Action Plan. This process also coincided with the council’s initiative to formulate a strategic plan. It is my hope that the gender and gender-based violence plan will be incorporated into the council’s strategic plan.

My most memorable moment with Gender Links was when I scooped the runner-up award at the Zimbabwe Gender Justice and Local Government summit in the Gender-based Violence (Prevention) category award in March 2012. This award greatly boosted my confidence in my work as a Gender Focal Person as well as in my personal life. I have always been a gender-oriented person, but I had never expressed it openly. Gender Links gave me the opportunity to express this and to share it with others so that they apply it in their own lives. Gender Links also helped me to gain an understanding of gender issues, some of which were a matter of triviality to me.

The teachings and mentorship that I have received from Gender Links have changed my personality. In addition, the platforms that Gender Links has provided for me to express myself have greatly impacted me. The mere fact that I am the Gender Focal Person for council means that I am able to represent women and bring their concerns to light in council so that they are not marginalised in the budgets and in the decision making processes in council.

I give a lot of credit to Gender Links for these changes in my life. Priscilla Maposa has been very instrumental in helping me make these changes. I have gained a lot of skills through working with her and Gender Links. These skills include the ability to document activities, which is important in being a responsible and accountable person. In addition, the gender scorecard that I painstakingly filled in to assess the gender awareness of council has enabled me to do gender analysis. My report writing skills have also greatly improved as a result of the experiences that have had with GL. I am happy to let you know that I am applying most of these skills not only in the workplace but also in my personal life.

In as much as I can credit GL for all these achievements, I should say that there have been also other organisations that have been instrumental to the changes that have occurred in my life, such as the Zimbabwe Resource Centre Network, the Ministry Of Women Affairs, Gender and Development and other Non-Governmental Organisations.

These experiences and changes have seen me representing other women in council. Resultantly, the council has formulated a policy that has seen an increase in the employment of women in the council from 18% to 27%. There has also been an increase in the female directors in the council, something which is greatly owed to the program by GL. Mind-sets are really changing in council. Many thanks to those men who have supported the cause for gender equality.

In future, I really endeavour to see through Gender Mainstreaming to its logical conclusion. I would like to thank Gender Links for the exceptional work they are doing in our lives. I also want to ask them to add some local (Zimbabwean) content to their publications so that Zimbabweans are able to relate to them.

This is wonderful keep it up HON MANEMWE