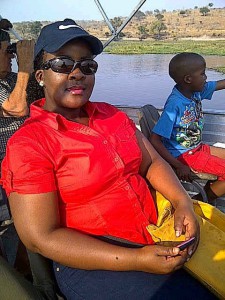 The workshop revived/ re-kindled my spirit of being a gender activist which was in-calculated me during my university studies. During my first year at University of Botswana, I was doing Introduction of Sociology and Gender Studies was the component of my course. I enjoyed the course since it made appreciate this “gender thing/talk.””  As I did my final year for BSc Town & Regional Planning, Physical Planning & Gender, was one of the courses I did towards my attainment of my Degree. It is a course that made me realise that, as a planner, I can’’t talk development without gender.

When I started my job as a physical planner, mainstreaming of Cross cutting issues (gender being one of them) was a burning platform in preparation of our 5 year development plans. From experience I realised that it was too theoretical.

It was after the Gender Links workshop that I realised that, Gender Mainstreaming is possible or can be realised through our daily work as a Local Authority. For example my core duty of Planning for sustainable settlements, is a way of working towards some preventative measures to curb the effects of climate change, which affects women mostly.

The workshop by Gender Links and the district Summits I have attended so far, has taught me that, as a planner for physical developments, I have a part to play in combating Gender Based Violence. The layout designs I prepare, (where I propose passages and Open spaces in between plots, can be contributory to Gender Based Violence), Naming of streets does play a very important role in Combating GBV.

Moshupa Sub District Council is counted among the Local Authorities that are seen as centres of excellence in Gender Mainstreaming, due to the dedication and commitment I have displayed in advocating for Gender Equality, and end to Gender Based Violence.

As a gender Focal Person for the sub district council, I played an advocacy role, during the implementation of some projects and programmes, there have been some positive results or achievement of some objectives, aimed at gender equality and Gender Based Violence.

I have made sure that, the Gender Action Plan that was adopted by the sub District Council in 2010, (and shelved) was revisited and some council work be aligned to it.

I did this in 2013, when the Council had some limited funds for street lighting. Due to the limited funds, Council had to prioritise which road to start with to install 1 km of street Lighting. There was an an infighting, because every councillor wanted the project to start in their area.

I reminded them about our action Plan, and to break the tie, I advised that, we consider the road leading the proposed Moshupa Bus Rank, as a priority road due to the anticipated number of women who will be using that road from the bus rank at night. My advice was heeded and the consensus was reached that the road will be the one given a priority. As we speak the road has street lights.

The workshop by Gender Links and BALA has worked as an eye opener, and has taught me that whatever activities, service we provide, we should look at them through the “”gender lens”, since we are very close to the grassroots and understand peoples’ needs better.

The working relationship I have with BALA and Gender Links, and from the summit, has enlightened me, that, as a policy advisor, I should be in a position to monitor evaluate any programme/project undertaken by council to determine how it can benefit both men and women in an equitable manner. If it disadvantages the other section of the population, I should be in a position to find alternatives of how it can benefit everybody.

As a Planner by profession, and also a Gender Focal Person I have been advocating for mainstreaming of gender into our plans, projects and programmes. I have always encouraged my fellow planners that whenever there is a project or programme that we propose, we should look at it through the ‘”Gender Lens””, that is we should not only look at the economic benefits but how is going to benefit both men and women. Example: Construction of a mall or a road, should not just benefit men who will be employed there, but we should play our advocacy role to make the construction environment conducive for women who are most in the Informal sector to thrive there.

The District Summit awards on Gender Mainstreaming has taught me to appreciate that we still have a lot of work and lobbying to achieve the 50/50 agenda.

My way of doing things and the need to always position myself in the shoes of other women who are disadvantaged in the society. The many roles we play as women, tend to disadvantage us, in one way or the other. Every time I am driving, and I see a lady carrying a child at the bus stop, I stop to offer her a lift. This is because I understand the burden that she is carrying as a woman. I always have a feeling that, If I was to change the labour laws or the employment practices, I will bring a difference to women’s lives at the work place.

I have always thought that advocating for women’s rights and the less disadvantaged, can be done by politicians or by someone outside the organisation, but ever since the interaction with Gender Links, advocating for women’s rights can be done at conceptualisation stage of a project. Prioritization of a road to be installed street lights was done through a gender mainstreaming perspective, as a way of combating Gender Based Violence.

The former Country Manager, Ms Keabonye Ntsabane. I have seen her to be a powerful and influential woman. She has been advocating for woman empowerment and gender equality during my school going age, and has soldered on.

Working with Gender Links during the preparations for National Summit has taught me that, is is very important to document and archive all Council Activities. Commemorations can be used to relay very important messages of woman empowerment and end to GBV  through the Themes. The day to day work at Local Authorities are an engine through which we can drive Gender Mainstreaming. Evidence is the representation of Moshupa Sub District Council at the District Summit and National Summits where we managed to scoop Position 4 out of the 10 councils competing.

The ladies who are my colleagues have formed a good team to work with. The dedication, commitment and support they have always displayed has given me the courage and strength to continue.

My future plans include assisting women who are in the informal sector in Moshupa to get suitable, convenient and safe space to trade in. This is because in our plans, we have not catered for them, and end up trading in un- conducive environment, which can be an inconvenience during harsh weather Conditions. I am planning to get a sponsor to build them better kiosks.