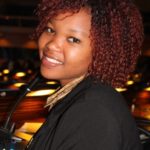 “Embracing being a Young African Woman Leader, an Active Agent of Change, a Catalyst of Development and a Trendsetter!”

Being given an opportunity to deliver a motivational speech at the Regional SADC Gender Protocol Summit and Awards in 2013, held in Johannesburg, South Africa. It was a really humbling experience to deliver a speech along side dignitaries in front of the SADC community that took part in the 2013 Regional Summit.

Please give information on your background, where you started, how you got involved in gender work. Please capture any light bulb moments, through anecdotes and examples.  (300 words)

I started doing Philanthropic works and Motivational Speaking when I was five (5) years old through my registered non profit making charitable organization called the GOGONTLEJANG PHALADI PILLAR OF HOPE PROJECT. As a girl and a child for that matter, I was introduced into the world of gender inequalities and biases earlier. These I realized that they can be found in our religious, cultural/ traditional and social platforms. Gender imbalances in many cases are institutionalised and justified using the above mentioned 5 entities. As I grew older, I also noticed that there was a lot of Gender Based Violence (GBV) in my country as I saw it in my relatives’ households first hand. With 1 in every 3 women in Botswana having experienced GBV, for a population of only 2 million, this was a really saddening and depressing statistic. What really broke my heart was the SILENCE. Very few people spoke up about GBV and Gender Inequality. More especially from the cultural side as I believe that the majority of injustices to women and girl children are derived from our cultural expectations, beliefs and harmful practises. By being a Child Activist and Advocate in such a society meant that I will not be spared in falling victim of these gender imbalances. My age and gender has always been and continues to spark controversy and shadow doubt over my work and achievements. Below is just a short list of a few challenges I have faced:

I was recently forced to leave my tertiary studies at University under the Government Scholarship simply because my social responsibility roles were considered to be “invalid” in accordance with the “University Rules and Regulations.”

“Aunty GG (Gogontlejang) is very helpful, kind and caring. On weekends, she takes us to the farm and also on school holidays and she educates us, she takes us to go and see historical and educational sites. She also gives us opportunities to speak on radio and she always takes us seriously. She is my role model because I want to be smart like her. She told us that it is not a crime to be smarter than a boy and that we must not be afraid to chase our dreams. She encourages us to work hard and be successful so that we can get out of poverty.”

Last year, through my org- the GPPHP, I organized a WOMEN OF SUBSTANCE DAY and a workshop with all relevant stakeholders at the Bokaa West Lands with the elderly farmers and young people whom are from the OVC (Orphans and Vulnerable Children) background.

The Theme for the day was “I AM A WOMAN OF SUBSTANCE; I AM A CATALYST AND

AN ACTIVE CHANGE MAKER”. The purpose of the day was to recognize and appreciate the immense contribution of Botswana Women to our country’s economic, cultural, educational, religious, social and political spheres.

The reason for holding the WOMAN OF SUBSTANCE DAY at the Lands (Masimo) is to draw the attention to the importance of Women at the Lands, Farms, Cattleposts and Rural/ Remote areas for their key role in raising some of the most successful, level headed and most well rounded people in Botswana. Also, they have powerful, deep, constructive and positive family roots and values that our Nation and other Nations can learn from. Yet these people are often forgotten when key decisions regarding Gender Equality and Empowerment are made.

We also build a pit latrine and re-painted the house mud hut of a 90 year old woman who is a farmer and a patriotic citizen. The elderly women of Bokaa West Lands were also taken on an enrichment visit to Lobatse Police Station to learn of best practises as anti-crime volunteers and were also taken to Gamodubu Childcare Centre to spend the day with Orphans and Vulnerable Children.

I do not have a very long history with Gender links Botswana but they have become like a family to me, primarily because of the very warm and welcoming staff spearheaded by the bubbly Ms Ntsabane who has successfully turned every stranger into a SISTER. The GL Botswana staff exerts passion in everything they do and it is clear that issues of Gender are ones that deeply resonate with their souls. They are always willing to go an extra mile to get the work done. Through GL initiatives and trainings, I have been able to acquire and enhance my knowledge on a broader scale on issues of Gender equity locally, regionally and internationally. A brief opportunity to work assisting the GL officers has also enabled me an opportunity to enhance my knowledge base in the field of advocacy. I felt really privileged to have been given an opportunity to assist in writing the speech for the Minister that he delivered during the official opening of the Local SADC Gender Protocol Summit and Awards 2014.

My introduction to Gender Advocacy and Activism also meant that this ‘new’ agenda was definitely in cooperated into my organization’s mandate- the Gogontlejang Phaladi Pillar of Hope Project. Change is a process not an event and progressive and impactful change usually requires strength in numbers and collective efforts. I brought the Gender agenda into the GPPHP’s mandate and thus I began training the GPPHP Facilitators and Volunteers on Gender matter at mostly local and also a bit of Regional and International level. I shared with them the international treaties and human rights commitments on Gender that Botswana has not yet signed. This was done briefly as the main focus and at the core was discussing the SADC Gender Protocol that Botswana has not yet signed. This lead to holding the first ever Women of Substance Day and Dialogues session to be held at the lands with the farming community. This was a huge success and since then, the community is being mobilised on certain issues such as the ORANGE DAY (25th of every month- standing against GBV) and also doing build up activities to the 16 days of Activism and Botswana’s elections- defining women’s position.

“The GPPHP continues to transform and change the livelihoods of many people and also to contribute positively towards the development of Botswana. What started as a young vision of a 5 year old little girl is now becoming a wave of efforts and actions in Botswana by different stakeholders whom have all been inspired, motivated and challenged by this young leader to do more and take into charge their social responsibility. I am greatly humbled, pleased and honoured to be part of such a great initiative and contributing towards the making of a new history. This generation’s history. We have lost Nelson Mandela, but we have a greater, younger and a female version of Mandela.”

One of the gaps that I discovered in my country in the way in which Gender Advocacy groups respond to gender issues is that often, many times we neglect the rural and remote areas community. This may be due to challenges with language barrier, geographical location, and lack of logistical support, dispersed neighbourhoods and faraway distances. After visiting a certain settlement where teenage pregnancy was rife as a result of incest, I decided that it was high time the gender agenda also came to this particular community. I have decided to work closely with the rural and remote area community by empowering them about gender issues, training them through bringing relevant stakeholders on how to respond to gender injustice and also hearing their points of view. One thing about the rural and remote area community is that they are the ones acutely affected by societal and cultural gender insensitive biases and injustices. They also fall within the range of unreported GBV cases. Now it is important to capacitate these if we are to ZERO in on GBV and gender inequality. Through the GPPHP, I am going to work hard at capacitating, educating and empowering this community.

Gender links Botswana has done very well in raising awareness about Gender issues in Botswana. I am happy that now in my country Botswana, we are more gender sensitive, more advocacy groups are getting on board to advocate for women and girl’s equality, many people now in Botswana speak out against GBV, the nation is more empowered on how to act, report, respond and heal after experiencing GBV, more Gender Champions are getting recognition and the number of GBV cases being reported has increased.

“I didn’t know that Botswana has not signed the SADC Gender Protocol! Had it not been for your (Gogontlejang) post on Facebook calling for support to pressurize the Government to sign it, I would have honestly not known. I believe this is call for action, we need to do more. I am willing to join you in your quest and I believe that the first thing we should do is definitely start with empowerment. How many people like me don’t know such vital information?”