Ms Keitumetse works as a gender focal person in the Kasane Police Force.She is also a counselor, motivational 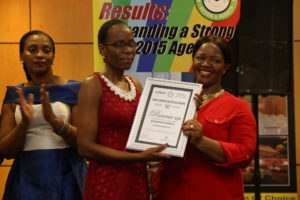 speaker and mentor. Trained as a gender focal person and peer supporter, she addresses issues of gender in the work place and her community. She often teams up with the stakeholders to conduct community workshops aimed at empowering women at speaking out against violence.

Other activities that Ms. Keitumetse has undertaken include spearheading house-to-house initiatives to speak to people about abuse, conducting school outreaches to address the impending behavior of girls leaving school to become sex workers.

Ms Keitumetse has been recognized as one of the seven executive district crime prevention officers and believes that this position and her work as a member of Kasane youth club   have helped her efforts in mobilizing the community on issues of inequality and violence. Her efforts have yielded results, as there has been an increase in reported abuse cases of abuse as more individuals are empowered to speak out. Ms Keitumetse uses her experience from interacting with the community to trains fellow female officers on how to handle victims of violence and perpetrators, to push the agenda even in her absence.

I attended the Kgotla meeting that was held at Kazungula kgotla. I got a chance to speak at the meeting where I sensitized people about violence. During that course of time, I did not have enough leadership ability but currently I am working on leadership through developing activities specific to address gender related issues.

I was not quite aware of the term ‘socialization’ in its practical sense until I was transferred from station to District level where I carried the post of Gender Focal Person. I now know that it is important to groom young people and children into the gender champions we wish our society to have in the future. Most women resist empowerment because of how they have been socialized, to be ruled by a man

I engage in some activities such as discussing a lot of gender sensitization in my work and to the community at large. As the Gender Focal person address students in different schools on issues of violence and offenses like rape, incest and defilement equipping them with information so that they prevent new G.B.V incidents occurring or re occurring, places to seek for help and  also strengthening their  capacity to address G.B.V.

Championing gender has made a significant change in my life. I have become more aware of the consequences that inequality has on me as an individual, so I am actually treating men and women with respect in all aspects of life. I am also teaching my children to respect and acknowledge women’s opinion .The time I got this championship, I learned to be responsible for the change and to lead by example. In Kasane district, I am famous because of this change such that, Tebelopele, Kasane Primary, hospital and Gender Affairs are referring clients to my office because they have seen my potential.

The future plan is to develop and run my own Non-Governmental Organization that its agenda will be to assist the community to accept and accommodate the structural changes in our country both at individual and community level. The organization will be responsible for counseling, retreats, campaigns and so forth. And also continue to sensitize the community as well as relevant stakeholders on gender issues.