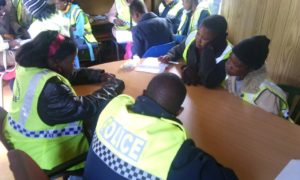 “Women are just as capable as men. If the playing field was level, men and women would have the same impact, achieve the same goals and have equal representation in various leadership levels”

Opelo Nichenge is a Gender Focal Person who helps her clients to move from a place of distress to functionality. In order to help my clients achieve this, I use a holistic approach, which allows the relevant systems to be part of the intervention such as the family, schools, government departments and other stakeholders.

My first experience with gender was when I was taking Politics of Gender as a course at tertiary during my third year. At that point, I realized that as a country we still have a long way to go in relation to realizing gender equality. It was through this course that I was introduced to concepts like: gender roles, gender expectation, responsibilities and gender norms. My interest in gender issues was heightened when I joined BAPR as a Social Worker.

I have been an active member of the District Gender Committee. I have been involved in carrying planning, implementing and monitoring gender activities. I was part of a team that talked to students about GBV across for Junior Schools in Lobatse. This program ran for a period of a year. The aim of this campaign was to sensitive students on the effects of GBV and where to report cases of GBV. In August 2016, I start a women empowerment support with help of Peleng East Ward Development Committee Chairperson. The aim of the support group is to provide economic knowledge and engage in activities that will create financial support to women and their families. Plans have been made to invite various services providers to motivate and address the support group. Examples of these service providers are Poverty Eradication, Gender Affairs and women who are in business.

Being the only female manager and youngest person to have been part of the management team, I face many challenges trying to get my ideas and thoughts across to my three male counterparts. Typical of a patriarchal society, women in my organisation are expected to take on the “motherly” duties like supervising children during the after school care program for OVCs while the male counterpart would choose to remain in offices. One of the challenges faced by my female colleagues is the label that is given to women by men, men perceive women as more emotional than skilled at problem solving. This is also fuelled by common perceptions and stereotypes of women in leadership. The same is also true for taking orders from a female leader.

“You cannot teach an old dog new tricks” applies to situations like GBV in the real world. The older generation are still stuck in that era where women suffered from oppression and where not allowed to say anything on that matter. Moving forward, I plan to shift my attention from the older generation and focus on the younger ones especially the girl child. I plan to introduce the mentor-ship program for OVC girls between the ages of 13-17. The aim of this project would be to provide these girls with a positive role model who would provide life skills training and assistance in terms of: words of encouragements and hear to listen. This project will be piloted in one school and later rolled to other schools. Basically, my motto for this project will be “Train up a child in the way he should go, and when he is old he will not depart from it”