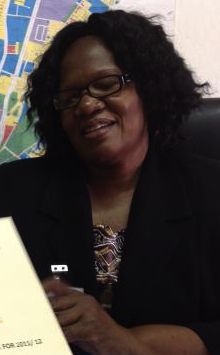 Last year, we had strikes across the whole country. There were lots of riots, but in Lobatse it was calm because of the leadership from women. You know when you are a woman you don’t want to shed blood – everyone saw what happened at Marikana in South Africa. All those people who were shooting were men. Did they have a heart? But as a mother, you will always be a mother. Lobatse was calm, because the majority of the leadership here were women; even within the police. A man may have allowed the police to beat students because of the way they were behaving, but a woman wouldn’t allow such a thing.

Gender Links is a good organization, because it is there to educate people and disseminate information on gender. They do this by training local leaders, meaning all councillors and the mayor. They also come and train our staff on developing action plans and gender budgeting. What I have seen with GL is that they did a good thing by going through us in the council. People will always say gender is crosscutting, but if you don’t plan for it, if you don’t budget for it, you won’t achieve anything. We used to have other organizations that talked to us about gender, but there was no action. They did lay the foundation on which GL is working, but they never took into consideration concrete actions like budgeting and planning. Now, we feel like we are really moving ahead.

I first got in touch with GL at the end of 2009. I was voted into office in November. I remember it because they came two weeks to the 16 Days campaign. I was still new in the office when I came to know about GL. In only two weeks I had to work around the clock to arrange a seminar and look for the money. I invited people and I called it the “Mayor’s High Tea” so I can lure people to come for the meeting. The hall was full. There were more than 300 people. People were excited to learn about gender. We went to the places where most of the women are raped and prayed there. The meeting was very successful. We didn’t have activities every day for 16 days because of the kind of work we are doing. The following year we did it again, 2010 and 2011, and this year we are preparing to do it yet again. This year we are planning to have many women march 20 kilometres in Lobatse during the 16 Days. We engaged the whole council. It is not one person show. For gender to go forward you must involve other people. Even within the council, we have a focal person on gender.

As mayor, I am the overseer of all activities of the council. If people are aggrieved in the community, they come to me. I am the head of the council, and I am responsible for whatever goes wrong. If people are not happy, they come to my office. There is a procedure for seeing me. The people come to me if they have gone through all the channels and they are still not happy. I chair the full council and I attend sub-committee meetings. I attend the finance and works committee; education, health and social services committee; housing and physical planning committee; performance monitoring committee; income generating committee, and the consultative forum. There are 24 committees in total. I don’t vote in the committees but I give advice. The town clerk attends some committee meetings.

There are two wings in the council, the administrative and political. The town clerk heads the administration wing and the mayor heads the political wing. The ministry of local government appoints the town clerk. We don’t have any conflict. There can be conflicts if we are not on good terms, but we don’t have that situation. If I need to know anything, I ask her and she reports any problems to me. Even in the council you cannot take decisions without advice from the sub-committees. Like today, we are going for the performance and monitoring committee meeting. This committee monitors all the purchases in the council. They will report everything they have bought and we make queries if we are not satisfied.

When it comes to planning, we take a bottom-up approach. We have what is called the ward development committee elected by the people. They sit down and look at the needs in the ward. They bring all their needs to the council. The technocrats consolidate their needs. It will be taken to the full council to own and adopt. We do it every 7 years. It is called the urban development plan. The current one is from 2009 – 2016. Those who were there did this plan and I took it forward. I don’t change the plan but I can review it. Last month we were doing the review. We were picking priorities because we don’t have enough money. We budget every year but based on the 7-year plan. This year we don’t have enough funds because of the economic downturn. We are already working on the 2012-2013 budget.

Before working with Gender Links, I had some knowledge about gender because in 1995 I was one of the delegates to Beijing. I was working as a fashion designer for clothing; I had a fashion design factory. I then went into financial services consultancy for government. Although I knew about gender equality issues, the training of Gender Links helped. Education is a process. You will never say I know everything. Even if you have a PhD you will learn new things. Things change. I learnt about the planning aspect. All those years we used to talk about gender gender gender, but we never thought about planning. We were just talking talking talking, don’t do that, don’t do this, but we never trained organizations to plan. Maybe that is why it has taken government a long time to address gender issues.

Now, thanks to Gender Links, when I look into a budget, I can see gender there. We need a budget for it so that we don’t search for money, we know that the money is there. Gender is crosscutting, but when in comes to the practical things you need that money.

My future plan is to see us as a council planning and including gender so that the next generation should know gender issues. The next generation shouldn’t struggle like us. In my role as a mayor I am inspiring young people. I am a role model. If you look at Lobatse, generally women overpower men. As women in Lobatse, we are eager to go out politically. The town clerk is a woman. The mayor is a woman. The deputy mayor is a woman. The district commissioner is a woman. The district police officer in charge is a woman. At the kgotla the secretary is a woman. So you see, we are inspiring our young girls to come up. I go to all schools to talk to the boys and girls about once in a year as a personal initiative. Now we are planning to adopt schools. This month I want to see all councillors to adopt schools. I want to see them motivating the students. We are 13 councils, 6 women and 7 men.

Women make a big difference as leaders, and I think people see that. I visit people every Wednesday at their houses to see how they are living. Even the staff here are not afraid to come to me because most of them are women. They tell me, Mayor we have seen so and so and she does not have this and that. I am able to go to the business people to say there is a problem and say hey, can you help me here and there? There is a sense of social corporate responsibility from the business community. When I see a problem, I get solutions. It does not have to be money from my budget. Social workers can come to me even if there is no budget. I run up and down as a woman to get a solution. But I know if it was a man he would say there is no money in the budget, what do you expect me to do? But as a woman, you have to make a difference.