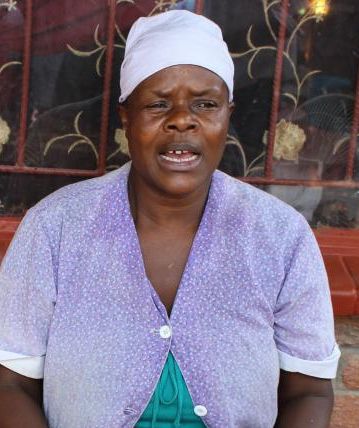 A beacon to the patriarchal community

The day Chipo Makoni met Gender Links (GL) in 2013 marked the genesis of a violence free life. She was trained to become a successful business woman and be able to compete in a world dominated by men. The skills she attained helped her to stop relying on her husband for survival. Before she met GL she was a victim of a hand to mouth scenario as she lacked the basic knowledge on savings and budgeting. Lack of basic knowledge on how to manage income and expenditure forced her to live like a slave as she was forced to beg from her husband on a daily basis. Whenever she begged him for money he took it as an opportunity to insult or assault her. Her partner viewed her as a useless mother of female children whom he did not have care for.

Makoni found the lesson on “self-concept” particularly useful because she felt that it directly addressed her situation. “I felt as if the facilitator addressed my personal life and by the end of the lesson I was equipped with solutions to my problems,” recalls Makoni. She was equipped with entrepreneurial skills during the training and she became self-sufficient. She no longer begs anyone for money and she is now able to come up with a detailed budget so as to properly manage her income and expenditure.

“After GL helped me to come up with a business proposal I borrowed US $ 100 from my children. I converted it into South African rand and I bought baby track suits at R 60 each. To realise a profit I sold them through barter trade. One track suit was equivalent to 100 kilograms of maize grain with a market price of US $ 15. I opened an Ecocash account to ensure that my money was safe and secure,” says Makoni.

Angeline Sirani, Makoni’s youngest daughter, expressed her happiness with regard to the changes that have taken place in her mother’s life. She said that there was no peace in their house as their parents were always fighting, but the situation has now changed for the better. “My mom is now an independent, successful business woman. I recalled how she managed to leave behind her past life which was marred by gender based violence (GBV) and start a new life. It has always been her dream to have a candle making business and through the skills she attained from GL she managed to have one. She also has plans to resume her now defunct poultry production business which collapsed after she failed to manage it properly as a result of inadequate business knowledge coupled with domestic problems,” acknowledges Angeline Sirani, Makoni’s daughter.

“Makoni’s experience of living in a patriarchal society showed her that for one to be accepted, one must have economic muscle. Now that she is economically empowered society treats her with respect and she is now independent from all forms of abuse. GL helped her to keep abreast with the times. She is now empowered economically and other women directly benefit from her. She formed a candle making corporative consisting of five gender based violence survivors,” according to Hilda Mudzonga, candle making corporative member.

Makoni is now computer literate and she can research and share business ideas with others on the internet. A survivor of gender based violence is now a community beacon and many people are looking up to her for inspiration.