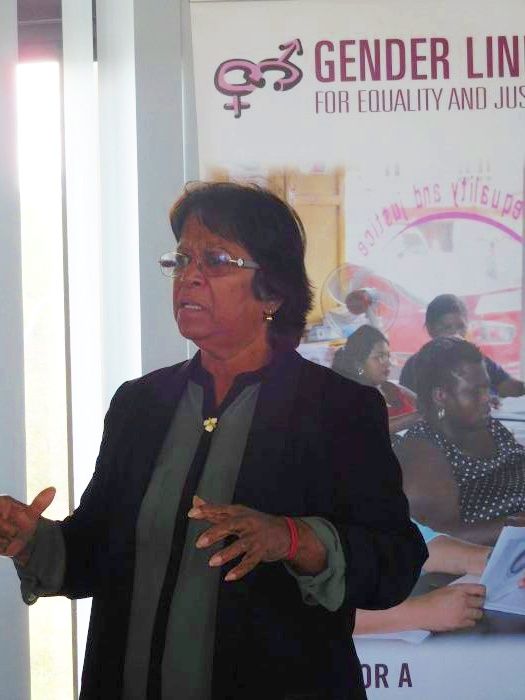 Soolekha Jeepaul Raddhoa has always been shown extreme interest in advancing gender equality throughout her 36 years of public service.  Her experiences serving as a syndicalist, working as a consumer advocate, recently serving as the Mayor of Quatre-Bornes for 2 years and now as a local councilor has made her aware of the various forms of oppression that women in Mauritius face.

Her qualities of leadership and integrity, along with her experience has made her a strong advocate for the advancement of women and girls in Mauritius. Attending workshops by Gender Links (GL) has been instrumental in giving her the knowledge and tools to understand gender and what are the implications of gender based violence and gender stereotypes in the Mauritian society today. It opened her eyes to certain realities, that even though she encountered them in her work, she had trouble articulating them. For example, she noticed that women had to make twice as much effort as men to reach the same goal. GL has raised her awareness on how gender inequalities continue to oppress women. She praised the fact that GL is a regional organisation that has enhanced her commitment to advancing the cause of women in Mauritius.

Her years in consumer’s advocacy has also illustrated the fact that while she was an advocate for everyone, she noticed that women tend to face greater barriers. She therefore started to take a special role in encouraging women to advocate for themselves and not be afraid to make demands.

As a syndicalist, Raddhoa often found herself as the only women on many platforms and the first women on executive committees. She believes that pioneering in these positions has allowed for other women to join these organisations in leadership capacities.  During her time as a mayor, she encouraged welcomed the appointment of women in various position and felt proud when the representation of women increased during her time as a mayor.

She also notes the advancement that have been made in recent years in Mauritius, where women can have access to any kind of jobs they want. However most key level leadership positions remain male dominated. The issue of “breaking the glass ceiling” in Mauritius is real. Raddhoa has herself felt the repercussion of this. Around election time, many people in her entourage believed that Raddhoa would get an opportunity to either be a deputy or a Minister. This was based on years of knowing her and the excellent work she had demonstrated over time. However, the leader of her political party did not hand her a ticket.

In terms of her legacy, as a Mayor she encouraged girls to engaged in sports and set up policies that encouraged girls to do so. At her family level, she inspired her younger sisters who saw Raddhoa as very courageous and look up to her and her journey. She also has been able to relate to women of all ages. She also inspires many women through the radio to speak up when their rights are being compromised.

Currently Raddhoa is thinking about the intersectionality of gender with issues such as racism. In her future, Raddhoa will continue to be animated by a sense of justice and fight for the better representation of women across all sectors in society. Raddhoa embodies living a life that seeks to create opportunities for women and encourages them to play an active role in society.