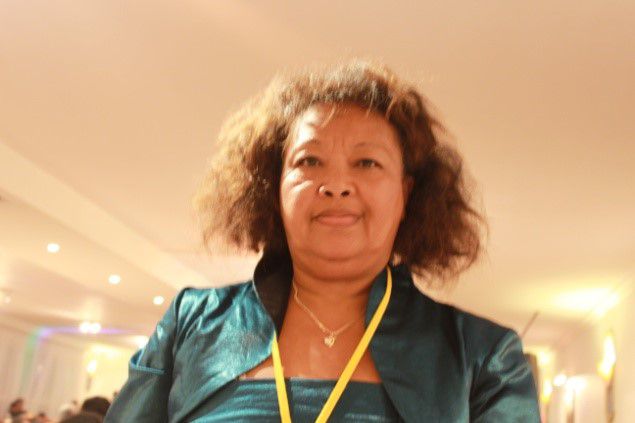 One day, Mrs Edouard Christiane Rahantandraibe was watching the news, when she saw Mrs Ialfine Papisy presenting the activities of Gender Links. She said to herself: ‘This meets my targets’. Indeed the title of her research paper for the final exam of her Administrative Studies course at the National Institution of ENAM was ‘The fight against poverty through gender policy in Madagascar’.

Her interest in gender has increased, especially after she received an invitation to attend the workshop on Gender, Peace and Security in Antananrivo, and when Mrs Noeline led a training session on the Centres of Excellence initiative in her area.

Christiane can be considered as a leader who brings about change because she feels that gender mainstreaming is gaining ground and thriving. Her art of persuasion and the different activities she has carried out have drawn many people in. The development projects she leads are successful to the extent that both males and females work hand in hand as volunteers.

As the head of the district, as per the decree 2005-12, Christiane is in charge of the implementation and coordination of the development projects within the areas under her control. She has in place a district that abides by the rule of law. She was able to set up the ‘Bean Platform’ and connect the different actors in that sector. Miandrivazo is now famous for this network.

Her contacts with Gender Links were extended during the process of setting up the centres of excellence (COE), the popularisation of the SADC Protocol on Gender and Development in the local councils of Isalo, Narimena, Manambina Fantalezana, and the celebration of the 16 days campaign three times.

Thanks to those sessions, she was able to strengthen her leadership skills. She gained self confidence while speaking and her persuasion skills and know-how improved. Most importantly, her conviction deepened.

These changes were possible due to sharing with others, and via the distribution of documents like the SADC Protocol. One of the things that really affected Christiane was the film that Mrs Noeline showed when she came to train the COE in Miandrivazo. The film showed women from different parts of the world demonstrating against gender based violence (GBV) perpetrated against women.

Apart from Mrs Noeline, Mrs Ialfine, Mrs Lanto and Mrs Josiane Robiarivony helped her a lot and did their best to support her. Her ability to sensitise people improved so much that she could implement any project jointly with men and women’s cooperation, without neglecting the contribution from the stakeholders and other associations or NGOs.

Christiane’s family life has had some modifications too: her children and husband share the domestic chores. Her daughter can play the guitar and the drums, and her son can do the cooking. The community gradually rejects the stereotypes and shares responsibilities. The couples discuss things and take decisions together.

Christiane has passed decrees to set up a reforestation monitoring committee to sanction the polluters and a decree creating the bean platform and a convention on the rules that are to be applied.

The thing that really surprised Christiane was that many men have become gender responsive. Christiane said that one of the major challenges she had to face was the stereotypes. She held a meeting with the community and she met the Lonaka and Tangalamena, the traditional leaders, to convince them about gender equality.

The next step is the coming local government elections. Due to the position she holds, she must have several women elected in the 15 local councils of the Miandrivazo District.

She also wants to pursue the environmental protection project, to reinforce her skills and to sensitise more and more people with the assistance of other Gender Links trainers. One of Christiane’s dreams is that the Urban Local Council of Miandrivazo becomes a centre of excellence. She thinks they should be sent to Johannesburg to get experience!