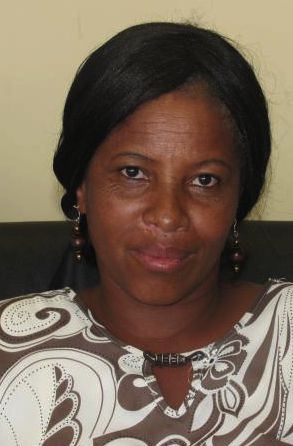 I am a mother of two, a boy, and a girl and my husband passed away in 2009. Both children are working. I started working in a non-government organisation called “Woz’Obona.” It was an organisation working with rural women who are practicing early childhood development in their centres, helping them with training. I was a senior trainer in that organization in 2000.

In the same year, I was elected as a PR councillor, heading community and social services. I supported many crèches and pre- schools to register with social development. In 2006 I was elected as a PR councillor again. I also served in the executive committee, heading the same portfolio. In 2007, I was reshuffled and became an ordinary councillor. The reason was that I was not towing the line, meaning that I am disagreeing with comrades. That gave an opportunity to register with University of Johannesburg and Boston College.

In 2011, I was also elected again as a PR councillor; they took me back to head the same portfolio community and social services. The reason was that councillors where complaining that ever since my removal from that portfolio they do not see any progress. During my reshuffling, I was not angry. I participated fully in the council making sure that I am constructive and give directives where possible.

There were colleagues who thought I would be quiet after being reshuffled, but in fact that time was my time to speak my mind in every structure. In 2011 I was elected in the leadership of the region, amongst men of Sekhukhune who were taking decisions for women. When I said something, they would say “ke le kwapa ga a tsebe gore monna ga a phegiswe” and even the women in the leadership believed that.

These where comments that I said, as a leader, I must be sure they come to an end. There was a need to include more “makwapas” that is Swazi’s, Ndebele’s, and Zulu’s, so that in leadership there will be cultural diversity. The actual challenge was that men occupy most of the senior positions and women collude to remain in junior positions. I am not losing hope. In the council, we have established a women’s caucus. I think it is the platform to propose workshops that will challenge women’s mind sets to address these challenges.