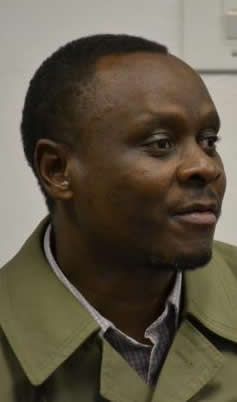 Francis Chikunkuzeni is a Lecturer at Malawi Polytechnic, and teaches Media Theory, Media Regulation and Global Cultures. He details his interaction with Gender Links as a phenomenal experience that has contributed to positive changes in his life.

She first requested time to conduct focus group discussions with students at the Polytechnic. I helped her to get permission from the authorities to conduct the research.

I then got to participate in a number of Gender Links activities including the 2010 Gender and Media Summit, Gender in Media Education (GIME) 2010 research and GMDC advisory group meetings and training sessions. For example, training on using the Virtual Resource Centre case studies that was held at the Polytechnic in 2012.

My most memorable interaction with Gender Links is the training we held on integrating gender sensitivity into media studies curriculum. While some colleagues initially resisted the idea, I managed to use my clout as the dean to ensure that the workshop took place. We were amazed by the participants’ attitudes towards gender topics after the workshop.

I encourage my students to research gender and media. I even ensure that examinations have a question on gender. In our media studies department, we refer students to the Gender Links website to access online resources on gender in the southern Africa region.

Gender Links has strong research, analysis and factual interpretation of facts and situations in the region on gender. The research helps us value and understand the dynamics of social differences from a gendered perspective. I encourage my students to use GL research as a model to analyse online journalism and also as a reference for current issues in the region related to gender.

As I reflect on my life, since my first interaction with Gender Links, my perspective and attitudes on the relations between men and women have changed significantly. I used to think that when people talk about gender, they refer only to women. Now I can see how both genders can share responsibilities and must be considered. I have begun to make changes in my own life, volunteering to take on duties that are traditionally seen to be for women; for instance, taking care of my children, bathing them and cooking for them.

I also began to understand reasons behind social constructions of our roles in society. In my institution, I have been very forceful to ensure that there is gender equality. As the dean of the Faculty of Education, I encouraged women to apply for faculty positions, including those in technical education fields; however, very few women showed interest.   Also, I made sure there were women representatives on committees that I sit on, such as, the Task Force on Access to Information and Implementation Strategy.

I believe I changed because of the knowledge I gained in Gender Links trainings and workshops. Interacting with gender advocates and people who have similar beliefs to yours helps you to change.

Gender Links can take credit for this change that I have personally experienced to a certain extent. They have had direct impact in my growth because of the content and professional delivery of the workshops, the attitudes of GL staff towards their work and their awareness of social structures that are at play in different countries.

When I participated in the workshops, I felt that I was a part of the GL network. The networking opportunities GL provides are great because it increases the number of people I can interact with individually.

At Gender Links in particular, I have mostly interacted with Saeanna Chingamuka. I can say she is a terrific resource mobiliser; she is also approachable, knowledgeable and passionate about gender and media issues.

There are other people who have also contributed to the change I see in my life. While at Rhodes University, I audited one of Lynette Steenveld’s courses on gender and cultural studies. I started seeing gender and sex differently as a result. Katherine Sarikakis also helped me appreciate gender issues. She taught me about male-dominated perspectives on knowing i.e. women have different ways of knowing and seeing the world, and male-dominated structures therefore impact the way that knowledge is generated.

As an academic, I wish to publish something on gender and media maybe along the lines of integration of gender into media curricula. I would also like to continue influencing my society, especially at the policy level through the different sub-committees that I belong to.