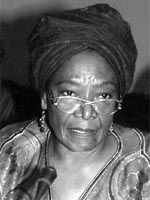 Gwendoline Chomba Konie was no stranger to politics; she spent her life working tirelessly in many roles for gender justice, and to alleviate poverty in Zambia.

A pioneer, she entered the halls of power when she was nominated to Zambia’s Legislative Council in 1962, two years before independence. And in the 2001 elections, she was one of the two women who made history as Presidential candidates.

“I’ve always been a political animal and politics has fascinated me, but I built a career in the Foreign Service,” said Konie who held diplomatic posts of Zambia’s Permanent Representative to the United Nations and Ambassador to the Federal Republic of Germany.  “In 1997, if you had asked me whether I would stand for the presidency, I would have said ‘you are crazy’. But as I kept coming from Germany to Zambia and seeing the economic decline and poverty, I began to think more.”

“I decided to stand for President because I believe the first country in Africa to tackle poverty, hunger and disease, coupled with the policy of bringing more women into decision-making, will develop,” said Konie who held a law degree and education qualifications in the social sciences and international relations. She also studied for a doctorate in sociology with the University of Warwick.

Konie started the Social Democratic Party (SDF) to put across her ideas, and received mixed reactions from men and women when she told them she would stand for the Presidency. “The majority of those I saw first when I made the announcement were men, because they were the ones in decision-making. They said it was good, but I do not know if their response was genuine, since many did not join my party.”  The strongest negative reaction to her candidacy came from people in the rural areas, she said, because of her sex.

“When I announced my entry into politics, overnight I had people who hated me and people who liked me and neither had the time to figure out why. People don’t hate you, but they hate your guts, your ability to step out and do something daring…I do not think that these reactions were necessarily always because I am a woman.”

Konie did find that as a woman, it was difficult to raise the financial support she needed. “Political party funding for a woman is much more difficult both locally and internationally, because the notion of a woman as president is still not accepted. Men are intimidated and do not want to support a female candidate, and I found that international supporters do not give money for the sentiment of democracy, but support who they believe will form the next government.”

The SDF’s platform during the 2001 elections was based on Konie’s vision of poverty alleviation as the key to putting Zambia on the path to development. She received 10,253 votes of the more than one million cast for the 11 presidential candidates.

Konie, who described herself as “a person who is not easily intimidated”, believed that women must seek power and support other women who do so. “There is a schizophrenia among women, because we will not embrace each other. Women say they want power, but when women stand for power, women then begin to say different things.”

“In Zambia, more of the male-led parties are sincere about women’s equality and being in power, and this is strange given the clout that women in Zambia’s civil society have in their organizing capacity and voting strength,” Konie said explaining why she thought she did not draw strong support from women during the 2001 elections.

“People do not like people who know their mind. We live in a traditional society so men and women are looked at differently. There are different expectations of women than of men, and different values are put on women than on men,” Konie said.

Konie was always proud of her stance and said she would continue to put forth her party’s agenda and work in the political arena. When she did not get a political position, she remained committed to alleviating poverty and achieving gender justice in Zambia. “I started the party to put across these ideas of poverty alleviation and gender equality. Women are the majority of the population and the majority of the poor are women who head households alone. Tackling poverty and gender equality are the fundamentals for development.”

The SDP’s policy also focuses on the need to re-evaluate the education system. “We still have the colonial education system. We need a council on education to analyze and chart the direction of education in line with the economic direction we want to go in.  We must encourage community education, agricultural development and investment and enterprise development at the level of communities,” Konie said.

On whether women bring a qualitative difference to governance, Konie said, “I cannot see myself going into government and reneging on everything I see as good. Women bring to problems a certain dimension that men cannot bring. Women persevere, they have ingenuity because they can make something out of nothing and women work hard and always believe that they must do well. I recall a talk I had to give in 1975 in the Royal Albert Hall in the United Kingdom. I felt I had to do well not just for my country, but for the whole of Africa.

Gwendoline Chomba Konie passed away in March 2008, in a day of national morning for Zambia. She was in service to the nation until the end of her life, and was given a state funeral.