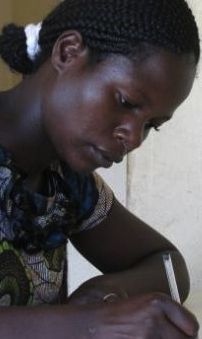 My name is Hilda Phiri and I have been the station Manager of Dzimwe Community radio since 2006. While one could think of a station manager’s position as a managerial post, the case is different with a community radio station and Dzimwe in particular. In spite of being in charge of managerial tasks of the radio station, I am also a content producer, presenter and reporter for the station. As a station manager, I am the overseer of all the radio station’s day to day activities. It is my responsibility to see to it that the editorial policy is being followed and that all the programmes and news bulletins are aired at the right time. It is also on my day to day to do list to monitor all the projects that Dzimwe is undertaking with communities around.

I was only 20 when I took over the managerial position of the radio. It was so challenging then, because the radio was on the verge of being off air due to unavailability of resources. We did not only have outdated equipment, but we lacked finances as well. Many people were not interested in working for the station because very few were willing to work on a voluntary basis. This demotivated the existing staff members, and the impact could be noted in the quality of the programmes that were being produced. I took it upon myself to turn the situation around.

In order to change things for the better, I decided to set targets. One of targets was that I needed to work hard and make sure that by 2013, the radio station should have computers in all departments. I thought this would impact on our work positively. I am happy that I managed to achieve this before the set timeline.

On staff salaries, I thought of the best way through which we could come up with an income generating project that could finance staff salaries. This is when we came up with the business centre idea. The centre offers communication and printing services. This project coupled with radio adverts has made a huge impact, in the sense that it is able to generate salaries for all staff members. Though the salaries are not very competitive in as far as the media industry in Malawi is concerned, staff members are at least motivated to work harder than before.

I have always wanted to work in the media and bring about change. When Gender Links came to train us on women’s economic empowerment, we thought that although we are a small radio station we could try implement what we learnt to bring change to society. Pushpa Jameson, GL former country facilitator taught us that if women are empowered economically, the gender based violence prevalence rate could go down. Thinking of how best I could integrate this into our programming and projects, the first thing that came into my mind was Women’s Radio Listening Clubs. This thought triggered another idea, village banking.

I sold the idea to my team and the board and they fully supported it. We then approached the government to assist us in training women on the importance of saving, how they could save, and how to share the savings. Additionally, as a radio station, we did programmes on the subject, and encouraged women radio listening clubs. This project is run in partnership with Farm Radio. During my last monitoring and evaluation of the project, I was amazed to learn that many women have have been empowered economically. While some women have started small scale businesses, many women testified during the visit that the economic independence that has come about as a result of village banking has changed their lives for the better.

Although I have always been perceived as a young lady since I took the managerial position of the radio, I have never stopped dreaming of ideas that could bring about positive change in the communities that listen to the radio. For instance, I am happy to learn through radio listening clubs how the radio is impacting on people’s lives.

In the past, it was believed that men were supposed to be at the lake fishing (as a source of income) while women should be in the garden growing maize and other crops for household use. Now many people seem to be breaking away from these stereotypical trends as they have realised that a kitchen and a garden are not the only places where women can be. Women have now ventured into economic activities that are generating more income compared to fishing. Some men are now helping these women as opposed to hindering them. Whenever I see such things happening, I believe that the media is indeed powerful. I have realised that as a media person, I have the power to bring about the change I need in the community.