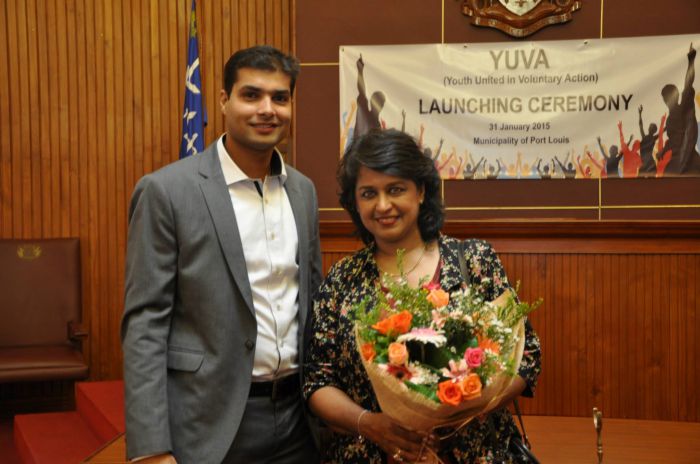 A young YUVAN: If you put fences around people, you get sheep

This is the story of Mr. Krishna Athal who always wanted to render his services to his country by being enrolled in the Special Mobile Force (SMF) in Mauritius. The Special Mobile Force is a paramilitary unit that serves as the main internal security force in Mauritius. Once he met a captain from the Special Mobile Force whose words changed his life completely. The captain spoke to him using simple words, the ways you embrace and opt to serve your country are very important, so do you want to join in the SMF, take out your gun every day, clean it and put it back in the safe? Or, would you like to become an exemplary citizen of Mauritius, serve the country with such great actions in society that every move of yours would be equal to a bullet fired from a real gun? The captain’s words made a great impact on his life and it was then that he started working towards leadership, women’s empowerment and equal rights for both genders. This gave him the idea to set up an organisation named Youth United in Voluntary Action (YUVA) to work on the aforementioned issues.

The birth of YUVA, a non-profit making NGO, in the year 2015 marks the beginning of a journey of empowering the youth of Mauritius to participate in a process of meaningful change through gender equality. At the heart of YUVA’s duty lies the conviction that the collective destinies of the human race are bound together. YUVA was inaugurated by the current first lady president of Mauritius, Ameenah Gurib-Fakim, which is a great honour for the organisation.

As Mauritius is facing unequal rights for women, domestic violence, physical and sexual abuse and women only being considered for mundane activities such as household chores, his idea of empowering women through his organisation came into the limelight. His beliefs regarding equal rights for both men and women, and the empowerment of women in professional life is the basis for him to be represented as a Driver of Change. A phrase that he often uses is that “Men rule because women let them.”

Talking about the nature of his work, Mr. Krishna Athal, national president of Youth United Voluntary Association (YUVA), is clearly a young and dedicated person in this organisation. He works primarily in the area of leadership. He has completed his education to tertiary level. Gender Links, an NGO working for gender equality, approached him and when he identified that both organisations are working towards the same goal, he took the initiative to collaborate with Gender Links.

Mr. Krishna is the recipient of various leadership awards from national and international bodies. He was the former chairman of the National Youth Council. He is also the author of the very famous political leadership book, ‘Ramrajya: An Enigmatic Leader’s Rise to Power’. He is also passionate about poems, human rights, transformational leadership and modern political thought. Presently, he is the chairman and national president of YUVA Mauritius.

Mr. Krishna’s main aim is to recognise the HE-roes and SHE-roes within Mauritius. His vision as a leader is to promote, protect and advance young people’s human rights by building leadership and strengthening gender equality initiatives and movements. This vision is being realised through YUVA, which is investing in the service ethic of youth in order to foster individuals in our society who understand local and global needs, and who are deeply committed and to encourage them to fulfil those needs through personal service, partnership, and good will. In co-operation with the local YUVAs, the department seizes opportunities to develop new activities to promote gender equality at grassroots level.

The leadership style that Mr. Krishna Athal practices is known as ‘transformational leadership” which is leadership based on values and vision; contrary to the transactional leadership style. Each YUVAN practices leadership and can have a positive impact – whatever his/her position in society or in an organisation. Krishna’s leadership style is based firmly on values and involves the identification of root causes and bringing about sustainable change rather than quick fixes. His motto in life is “Leadership for social change”. His guiding principle is that he recognises that “righteousness makes a nation great”. The ethical and moral basis of leadership in any system, a nation included, will determine its ultimate effectiveness. He aspires to develop leadership that espouses clearly defined, timeless values.

His ideology is a new way of executing social change but more than that, it involves the huge task of creating something from the very bottom up. He wants to change the mindset that change cannot be enforced by the youth. He says the time to take this power back is now, the time to act for a better tomorrow is today and the time to put aside this oppressive way of thinking is now. Whenever he faces a challenge, his words are “When your values are clear, decisions become easy.”

His ideology and the words of the captain of SMF really changed him as an individual. He is now in a great position and working for a good cause for the betterment and the welfare of society. He, through his organisation, has made a huge impact on society and the community as a whole. On every alternate day YUVA organises football competitions and cycling tournaments. On 21st June 2015, there was a Domino competition held with teams of two participants each, comprising one man and one woman.

He has also collaborated with different organisations who are working on these issues so that a larger population can be reached. In his first encounter with Gender Links via the Gender Summit, Mr Krishna Athal was quite impressed by the presentations of participants who had been working on these issues for a long time and making a great impact in their own ways. The work of other participants gave him new ideas and unique approaches for working with the local population. This summit gave him an amazing opportunity to learn from others. He was immensely impressed by Lakshmi Ganesse, who was one of the participants; her ideas of working towards things at grass roots level such as mushroom plantations as a way of empowering women.

His concluding thoughts can be summed up in three words “create, maintain, and sustain.” He wants to let innovation and passion be preserved in his actions forever and to continue adapting to the ever-changing world and encourage fellow Mauritians to stand together to improve their situation. But more than anything, to never lose the will to do better. It is the fire that burns deep within us that loses nothing by igniting the fire in others.

One thought on “Krishna Athal – Mauritius”

YUVA ( MR.A… WAS VERY RUDE N OVERACTING !)
HE N HIS GROUP CAME AS VOLUNTEERS FOR MAHASHIVRATREE AT AHFCF stand
But was a catastrophe .
WE HAVE LOST MANY !!!

THIS GUY IS NOT HELPING
HE IS DIVIDING.