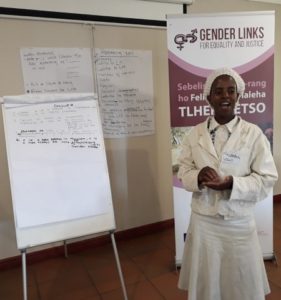 “Malebohang I can see right through you, ever since your husband went to South Africa I think you have been cheating on him. How else does a woman like you afford a phone like this? I mean you are just a domestic helper on top of everything else you never run out of data.” She recalled one of her neighbor saying that to her after coming back from Gender Links workshop where they were given smart phones loaded with data.”

Malebohang Sello is a woman who lives in Thaba-Tseka District, who prior to meeting Gender Links led a very difficult life due to the abuse she experienced at the hands of her husband and her in-laws. Malebohang’s in-laws would always demand money from their son who in turn gave them without even discussing it with her. Sometimes he would even beat her up for asking and tell her that other women are working while she is waiting to beg for his money every time. Malebohang was very miserable due to this so she looked for a job as a domestic helper.

Malebohang attended the three phases of an entrepreneurship workshop that Gender Links held for GBV survivors even though at first she was so reluctant to attend as she was scared that people were going to judge her or even blame her for everything that happened to her. The workshop was aimed at equipping these women with skills to run small businesses so that the can be well off financially. After the workshop Malebohang decided to sell steel wool and scrub to supplement her income as a domestic helper. At this time her husband moved to South Africa to do odd jobs. And he would sometimes send money but sometimes did not so Malebohang had her own money to help her take care of her family.

She sells her scrub and steel wool on credit and collects money at the end of the month and she has regular customers. Although her life has changed for the better since encountering Gender Links, however she senses that her closest friends have divided when it comes to her, Some are happy for her that she is no longer struggles as before but some are very jealous as they were so against her going for GL trainings and saying he was going to embarrass her family.

At present the phone has made it worse, but she is enjoying every moment of it much because she now advertises her steel wool and scrub on Facebook and on page called buy and sell your goods here ,the page was created for small entrepreneurs who still new in business to sell and buy goods from other people. She highlighted that the page is very people important but still maintain that if it was not because of GL she would not have known such because she did not have smart phone and she got chance to be taught about IT and how best can they use the internet in their advantage.

She is working very hard to see that her business grow and promised that next time GL comes she will have tuck shop at the taxi rank where she will be selling different things. And she mentioned that she happy because now she can see that her life has changed and even the way they were leaving with her husband has changed. Her relationship with her husband has improved a lot because she is no longer solely dependent on him for everything and he treats her better