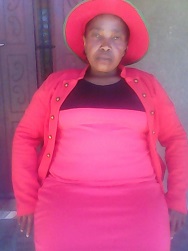 Councilor Mamorobane Ngakane from Tsoelikana Council in Qacha’s Nek. She first encountered Gender Links (GL) in 2011 when GL was having Women in Politics workshop and was part of the participants as she was contesting for the local government elections then under her political party. The training was intended at motivating women to participate in politics as it has been seen that most women are not that keen to take part in politics.

Councilor Ngakane has since continued her involvement with GL in so many activities including the first ever Training of Trainers (TOT) of Gender mainstreaming in the local government for Gender champions and Gender Focal Persons. Since being a councilor and she has done everything in her power to help women in her council and in the village, she has done community dialogues on gender issues, especially the issues that affect most women and men or married persons. She has also been working on HIV/AIDS issue, a member of support group even before she could become a councilor and she has been doing an amazing job. She realized that HIV/AIDS is still a problem in her community and she worked very hard when she join the council and influence it to turn one of the office a clinic as to safe people from working long distances to go to the clinics and also to encourage men to go for counselling as this was a major problem in her community.

Councilor Ngakane together with other women in her council have formed a support group for people living with HIV. They make sure that they adhere to their medication and help them have at least two meals a day as some of these people are very poor and do not have enough to eat. So they have given them a plots where they plant vegetables. They sell some of the vegetables to help them buy some of the things they need and the plan has been working so well.

Councilor Ngakane added that is very thankfully to GL because she would not be where she is today if it was not because of the GL’s help and guidance, she feels more powerful now as a woman and she is in a position to take charges. She is so much in gender issues and tries to be gender aware as much as possible and does everything she can through her office to help everyone. On a personal level GL has also empowered and helped her to be in a position to deal with her problems in life in a very strategic way not to depend on other people. She had brought women together and formed a society (stokvel) of savings and credit where they contribute money every month and help each other whenever there is a financial crises or a funeral, and this has given women more power as well as financially independence.

Her relationship with her community is so great that most people even come to her for advice or counseling, especially on family matters. This made her see that people regard her as a very important person. They have even re-elected her as a councilor in the past Local Government Elections. Councilor Ngakane hopes that GL will do a refresher workshop in her council soon as most councilors are new. She hopes to continue her home based care work in supporting people living with HIV/AIDS and their affected families. She also hopes she can impact as many lives as possible through her office.