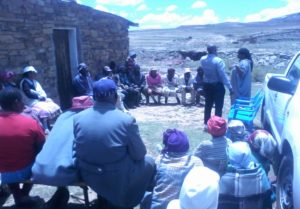 Tieang Sefali comes along way with Gender Links (GL) and he now takes it as his family. The first interaction was when he was a councilor at Ts’ana Talana Council and he has never looked back ever since. He has attended all the COE trainings during his term and  they part a very important part in his life at that time as he was elected as the chairperson of the council and being fully hands on in the council and being gender aware made his work very easy and also to interact with other people. “I would not be where Iam if it was not because of GL, every step of my journey at the council and when I started my political party they have been there, their support was amazing and I do not think I would have achieved all these if I did not meet GL”

Sefali recalled when he first started working with GL it was no easy because he thought people were going to be disappointed in him because most felt like gender was only related to women and was so against men.Sefali feared for going to the community and explain gender as he was not sure how it was going to be received. He also thought that it was not going to be easy as a man talking about gender issues, but admitted that after being equipped so much with knowledge more strength and confidence came back.

After several trainings with GL he went to his community and hold more public gatherings, his intension was to make sure that people understand gender issues especially man because they had problem with the way it was introduced. He then established a male-focused group that teaches men about gender issues and encourages them to stand-up against domestic violence in the village and also support and protect women within their communities. He added with happiness and confidence that now more men have joined the Programme because they believed in his vision. Also believe that since men are perpetrators of GBV it was a good platform and also for them to change for better, as a result they can have a free GBV community.

He established a theatre group for boys and girls in his village where they produce plays that discuss and teach the community about gender equality and GBV.The theatre group targets young because he thought if he started with young people by the time they grow they will be responsible and be in a position to make informed decisions.

Not only has he done so much about his community in terms of teaching them gender issues and GBV, he also formed his own political party and things are going so well even though he did not win the elections, but he is getter stronger every day and believes that his party will grow and eventually people will understand its ideology. Most people still get amazed as how passionate is still be, his energy and love and cry for gender equality. He had also established a Former Councilors Organization and its aim is to make certain that all the community members get the services without discrimination based on gender. He says the organization works with the current councilors to assist with his knowledge gained through the COE process as a gender champion.

He also widely appreciated by his community and they still invite him to hold various dialogues on gender issues. Even schools in his village invite him so as to instill gender in to the minds of learners from a tender age so that they grow to be model citizens. Through his work in Government and even after his work has yielded admirable results as people’s lives have changed both directly and indirectly. More people have become gender sensitive and support efforts towards women empowerment.

Hi future plan is to target male groups for more awareness campaigns for people to understand and appreciate the importance of women in the society. The theatre group will inspire other people and foster the community to build gender sensitive social systems. He hopes that future generations will be free from gender discrimination as a result of the advocacy work done by the theatre group.