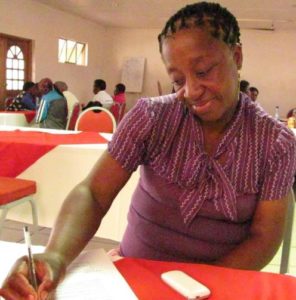 “I remember my first flight to Ethiopia, I had butterflies at the pit of my stomach. I felt my legs turn in to jelly as I was about to board the plane it was as if I will collapse. I can never forget this experience for as long as I live. I was so excited and anxious at the same time. As the plane ascended into the sky I could not help but marvel at God’s creation the clouds were the purest white like cotton wool. What a day.” Ts’episo said these when she remembers her flight to Ethiopia

Mpofu is a single mother of five who has lived a very difficult life due to the abuse that she has endured from a very early age until adulthood. Raising her five children was very difficult, so she decided to go and sell vegetables at the market, but the business was not doing very well as there were so many people selling the same things. After she met with Gender Links and attended the three phases of the entrepreneurship training she was able to learn many things that changed her life. She learnt about how to draw up a business plan, about good marketing and how to advertise her business, she also learned about the importance of keeping books.  She decided to make few changes in her business and that was her start of good things. She thought of making hats from plastic bags while still waiting for her customers and the business is doing very well.

Mpofu mentioned that her children used to be expelled from school all the time and she was so bitter her whole life because she could not understand why it was happening to her and why she was suffering so much. All those things have now changed because she is now able pay her children’s school fees well in time and take care of them very well, all thanks to GL. There is a never a time that her children go to bed without eating. She used not to have confidence and her neighbors would gossip about her when she was on her way to ask things from them. She hated her life so much, but now things have changed and her neighbors are the ones that borrow from her. Her status in the community has changed people now respect her more.

Mpofu now has a very loving relationship with her children and in turn they now perform so well in school. Mpofu’s hat making business has created jobs for other women in her community who were struggling like her and she feels so powerful and very happy that she has also changed or affected the lives of other people in a positive way. Since interacting with GL she had made her name known and most people respect her so much and how she runs her business. Through GL she got an opportunity from United Nations (UN) to fly to Ethiopia where she met with other women from different countries and share experiences and learn good practices that made her even more powerful and strong. They were presenting on how best they can make their small businesses to thrive and other businesses they can venture into without needing funding from the banks as they had realized it is very difficult to get them. If it was not because of GL she doesn’t think she would have met people or all these opportunities.

In addition to keep growing and making her business more successful she wants to learn how to make plastic bags and shoes so as to expand her business. She hopes it will help her to create even more jobs for other women.

In closing, Mpofu mentioned that even though her life has now changed it was not an easy job, but she managed to work very hard because she wanted to change her life. She urges other women not to give up in life, she highlighted that she had realized that whenever people work hard and have perseverance they succeed nomatter how long it takes.