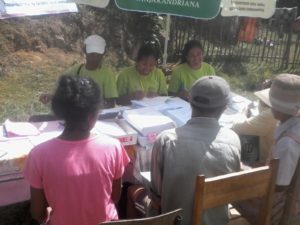 “Women have a great role to play in the community”

RAVALORIAKA Robert Eva Monique is the mayor of the urban council of Manjakandriana, part of the COE process since 2010. The urban council of Manjakandriana is located at 50 kilometers from the capital. Thanks to her leadership, the council is implementing several projects for the improvement of women status, especially in the domain of health, women’s access to land and finance, and other gender related activities.

In 2009, she started to think that both men and women should take responsibilities, and if there is no discrimination, the community will develop. At that time, she was not aware of gender equality yet, she just called it ‘sharing responsibilities’: she did not realize that she was gender sensitive. Later on, when Gender Links came and trained about gender mainstreaming, she could understand the concept better.

In 2009 she started to co operate with Gender Links. The challenges she encountered were those related to mentality. Still a lot of people are not convinced. They say it is not needed. Even women say why are we going to change our way of living if up to now, it has run well?

Gender has brought about many changes in her life, since she could change many people’s mindset, people ‘s views through sensitization sessions. She equally contributed to the development of the locality she was in charge of; for when each and everyone takes responsibility, then it will lead to progress.

Gender helped her a lot in her work because women’s social image has changed, and this  has changed many women’s lives within the community.

Her family life has been influenced by gender too: as a wife, as a mother. You are pleased, when you sense that you are respected and not discriminated against.

Gender mainstreaming can change the community, in the sense that when people feel the importance of gender equality, there is a change in their everyday behavior,  mindset, and practices. It is the change in behavior, thinking, and work that creates development.