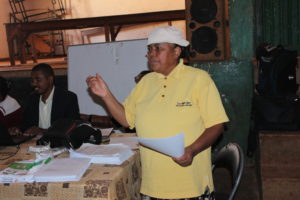 “Women have a great role to play in the community”

Thanks to interactions with Gender Links, Noeline could learn about Gender mainstreaming, in 2008 . She already knew about women’s rights before, since she had been a   member of VMLF,as well as other organizations. She could not really see the impact of gender at that time though; in 2008, with Gender Links she learnt that there is discrimination if both men and women are not given the same rights.

In 2008, a meeting of the elected women was organized, the majority of people were less involved in gender equality, but she quickly accepted, as already stated she belonged to VMLF. Gender equality was not applied yet, it was only at table discussions level . After which the protocol was granted as Mrs Ialfine made a grass-roots meeting in the commune of Andoharanomaitso. Mme Noeline was a Counselor at that time, there was a training, before that she had been formally trained with EISA. She got convinced in gender equality because of Gender Links trainings (training in gender concepts, SADC Protocol, Stereotypes, Management,….Subsequently, Gender Links sent her to conduct training in Miandrivazo, Isalo, Anosimena.

In 2008 ,the Commune of  Andoharanomaitso started to work with Gender Links and was really a founding member with  Manjakandriana and  Ambatondrazaka.

The underlying problem is the existence of the ruling men, who just accept but are not so eager, or less likely to implement, but also men, most of which, most likely, think that gender talk is nonsense, that it will never happen, because in terms of rituals and traditions, there is a bit of contradiction.

But they became convinced later on, because Gender Links Madagascar has launched training where men participants outnumbered women. The second problem was that  the women to be persuaded to join the Women’s Association, are very difficult to approach by “door to door” canvassing. Third,  the lack of resources, especially financial, because in Andoharanomaitso if the meeting lasts two hours, there must be a per diem. There is a need to do a “door to door” as it appears.  There is also the absence of female majority among , village chiefs . It is a serious problem since those in post are all men. Things would change later though, even the mayor is fully convinced about gender.

On March 8, there are about 1200 women, who are participating in the parade, at least up to 2500 women participating on 16 days of activism

As for the changes in her personal life, gender awareness

led to boldness and persuasiveness, and she has become   popular and respected by community. Third, she has become a manager, has acquired increasing leadership skill to become an effective leader, effective managers, increasing her “commission”. And most importantly, she had the opportunity to go abroad. She has become a reference in Brussels and Belgium. She speaks boldly in foreign languages, introducing gender mainstreaming.

In her marital life, her husband used not to be so faithful ,all their belongings were in his name, but thanks to repeated gender broadcasts on the radio all over Matsiatra ambony Region, he soon became convinced. They nearly divorced, but for now their home is so peaceful; the community appreciate her ,especially men. Her husband trusted her for the management of all their rice fields that can harvest over 20 tons, the vineyards, and a shop registered as her priority.

The change in the community, she has become an effective leader, becoming a figure of the