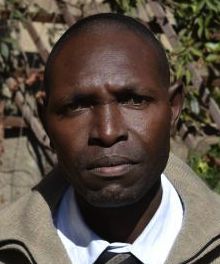 Over the years, I have learned a lot about journalism. My wife is a journalist, and the work demands long hours in the field. This has taught me to be much more understanding of the way journalism works. I am a lecturer at the Institut Facultaire des sciences del’information et de la Communication (IFASIC), where I teach print media studies and basics of journalism. I have been working to mainstream gender and realise gender parity within the organisation. I also work as the Gender in Media focal person at IFASIC.

In the DRC, we organised and hosted the first media literacy training in the country. It was not easy as we had to translate the materials to be used for the training from English to French. We worked for a full two weeks flat to complete and adapt these materials. Even though we were under pressure, I enjoyed doing this as it was my own contribution. This was the first time something like this happened in my institution. People welcomed it, and were keen to be part of the research.

Being part of Gender Links has made me notice the gender gaps that are prevalent in media training institutions, in the newsrooms and in life in general. At IFASIC, female students are now more than 80% of the student body. However, these women do not go into the newsroom after their studies. This is a general cause for concern if women are to be at least 50% of employees in the newsroom.

My perception of women, especially of my students, has changed. Before all these gender trainings that I undertook, I perceived a woman as just being a woman. Now I can see that women have the capabilities to contribute to society’s wellbeing and knowledge base. I do not live by the stereotypes I had before. My wife is a journalist herself, and this has helped me to understand these dynamics, especially the dynamics of the working environment in the media industry. Young female students have even noticed this change in me and have become closer to me as they see that I have a changed mind-set. I encourage them to go into the newsrooms and work there and give them the encouragement. Once they get into the newsroom, they should be confident enough to cover any news beat.

Knowledge I received from Gender Links has changed my understanding of gender issues. I am now better informed, and empowered to act on gender issues. The approach which Gender Links has used to try and raise these issues has been practical too. They have negotiated with us, and not imposed anything on us. Before Gender Links came to us, my mind was seeing gender relations from only one perspective; the typical way that society has been structured to think and relate to life. It was a patriarchal perspective. As I opened my mind to the teachings we received, I started to foresee possibilities and opportunities, and I began to understand the complexities that surround gender discourses in our society and even in our institutions.

The two-way approach Gender Links uses is really effective to bring new people on board; it can be adapted and replicated. I saw the value of a participatory approach; I have also adopted it in my line of work. I just do not stand in front and teach students, but now I try and allow discussions and presentations from students, which increases interactivity. Students are now much freer to talk to me as they know they I’m more sensitive and open.
Personally, I was able to adapt my behaviour a lot as a result of these trainings. My view towards issues around me has evolved a lot.   My wife helps a lot in my perception of gender realities. My family life has also seen a change over the years.

I feel there is need for continued mainstreaming of gender in my practice. We have come a long way, but we still have much further to go. I need to help my institution to mainstream gender as much as possible. My meeting with Gender Links was very useful; it changed my perception of gender realities. I would like to continue to receive training on media issues and other topics, so that I can improve my practice and skills. It can really benefit both my students and me. Such trainings even in the communities should be done so that people in the community know how to use the media to get information, speak through the media and be heard regardless of whether they are male or female.