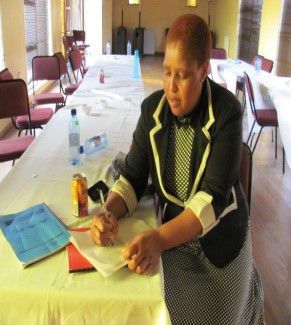 “Before I met with Gender Links I had always believed that men were our decision makers and always would be, but now I know that decisions are made by all in the family combined”

Mamofeng Lepheane was abused by her husband and had always seen herself as a victim until she joined the Gender Links training. When she first attended the training she did not know much about gender based violence and gender issues until she met with the Gender Links staff which gave her a better understanding of gender. Like other women in the village who were abused by their partners, she had always had a back seat as she had felt sorry for herself her whole life. She always thought that men were their decision makers. Lepheane first encountered Gender Links in 2014 during the ‘I’ story workshop which impacted her life in a very different way and changed the way she used to understand certain issues.

Besides being called by her husband’s name in her village and the fact that most people do not even know her name, she has changed her life and those of the people in her community. She has formed a support group and they plant vegetables to support the orphans in her community and give jobs to the unemployed villagers and to take care of the children. Lepheane is a very hard working person as she has touched and reached the hearts of the poor and many neglected children due to the GL training that changed her life.

Since 2013 Lepheane has always wanted to be in business, but did not know where to start and did know anything about it, but that did not stop her from dreaming. While she was trying different businesses to see which she could get involved in, she also realised that there were so many orphans in her villages and most of them were orphans because their parents died because of the domestic violence. That touched her heart and she made a decision to do something about it. She learnt many things concerning gender as a whole, especially concerning gender based violence which was seen as a fashion in our villages. Gender Links has given her a different mind-set or way of thinking about gender. She is making sure that she puts into practice everything Gender Links has trained her on. Some of the things were not easy to do such as to change and teach men about more especially because she is a woman; men were always not on the same understanding as other people.

Lepheane took the training by Gender Links as a learning journey because she never thought that she could be responsible for a certain number of children who now depend on her for food. She also took this as a lesson, in a way that she has changed many people’s thinking as she is a living example for the community because she provides for the needy. All this has changed because the way people think about her now is totally different; there is progress, especially with men. When she holds meetings or village gatherings men are no longer negative; they understand GBV issues better and the number of cases have dropped. People are free to go to the police stations to report GBV and it is something that people used not to do. Her gatherings are very open for people to participate in discussions since a light seems to shine for all those who did not understand things are better.

The voice of GL is extended because even when they are not in the communities the people still hear about the issue of GBV. Training the women survivors has been a very thoughtful and excellent idea because they have meetings with villagers more often and are able to talk more about these issues which will be extended even to the rural areas.

Lepheane has learned that men and women have to be treated in the same way; men do not necessarily need to be the only decision makers in the family; or in political matters where they think that leaders should always be men. She also learned that it is very important to participate in national activities such as the 16 days of activism against gender based violence. Since she is now equipped with skills on how to start a business, manage a business and use IT as a very important tool to market or advertise a business it is going to be very easy to build her own business when she finishes. She also learned how to speak to people confidently and handle issues when she is emotional.

Seeing the way that people conduct their lives after they have interacted with her makes her really happy to know that she has changed people’s attitudes, and she would not have done all this if it was not for GL through its training. She mentioned that she can now speak in public and her family members have been very supportive and they even go with her to these meetings. “People took me seriously and respect my work”