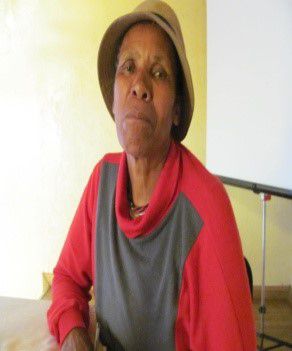 Victims of gender based violence should not be ashamed

She could not hold back her tears when she remembered her first interaction with Gender Links as she got a message from her councillor to go to the council and when she got there she found many women and although she did not know all of them, she knew a few. They were told to write their gender based violence stories and she found that very strange and she did not like the whole idea because she thought the people were going to laugh at their problems. She even lied that she did not know how to read and write so that she could sit with Ntolo and at least tell her alone and she wrote the story for her. She poured everything out to Ntolo and she felt so relieved after that session. When she talks about GL to people she talks of it as a counselling organisation.

Due to her unique character and the work she does in her village, this automatically made her a driver of change. She mentioned this in a bold voice as she indicated that she was abused by her father from a very young age until she was married and that did not change because her husband abused her even more. So basically her whole life was caught in a circle of abuse. She was angry with the whole world because she did not understand why her life was such a mess and why the people she loved hurt her. She made a decision that she wanted to change her life from the outset and she wanted to teach other women in her community, especially the ones that were abused, to learn how to appreciate themselves. And therefore people could not stop thanking her for changing their lives.

She mentioned that in her village, once somebody has been abused, people treat her badly and even blame her for the abuse and many women would even commit suicide because they felt worthless, but she was able to change those attitudes amongst community members. She was able to teach men how to treat women and show them that they are equal partners and therefore they should make decisions together.

There is a change in her life because now she can sit together with her husband and discuss issues that affect them and even make decisions together. This was something that did not happen before she encountered GL. She is now able to take care of her family and her grandson mentioned with so much happiness that his grandmother is now able to pay his school fees and they do not go to bed without food as used to be the case. The knowledge that she got from GL’s training helped her to channel her business and also to make sure that her business made profit and she was happy to announce that her business has grown and she was making great progress.

Mohale has gained so many skills as well as knowledge, values and attitudes that she was able to transfer to her fellow community members. She mentioned with a smile that she was able to touch a computer for the very first time and she was scared that she might break it. However, the lesson helped her so much because after the training she was able to visit internet shops and make business cards for her business. It was a scary experience but she enjoyed it the most. She recalls that she used to think that only rich people went to internet shops, but that changed after the IT training she got from GL. She even opened an email address and uses it to communicate with her friends on their cell phones. She mentioned that the changes in her life have shaped her life and this has been reflected in the way that she relates to her closest family members. Her family have responded to these changes in a positive way and encourage her to keep up the good work and tell her that they are proud of her.

She also has affected her community because they come to her for advice and to attend the meetings she holds for women and men to discuss GBV issues and the change from which her family is benefiting. In closing she mentioned that she is thinking of making these meetings huge and she will be holding more meetings, at least two per month.