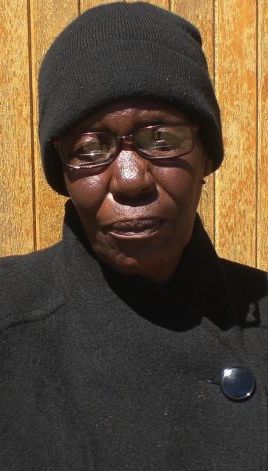 Mamotlalepula Moloisane is a very old person, but she is still full of energy. At 75 years old, she is a councillor at the Tsoelikana council. Since she was a little girl, she has always had passion for good governance and liked politics. She has been working with Gender Links for quite some time now; but when she heard that Gender Links wants to do a changing lives profile with her, she said “You have been asking me questions since you first saw me, what more do you want?!”

She is a very serious member of her political party, and she has been very reliable in her role. She did not actually want to contest for the local government elections, because she thought that she was too old to be a councillor. Her members convinced her to contest, and luckily it was not a difficult decision because she likes her party, so she decided to give it a chance.

She was chosen to take the special seat for women in the council. Even though she likes good governance, she was reluctant to accept the offer because she was afraid that she was going to change once elected as a councillor. She believed that if she agreed, she might forget about her responsibilities in her community. She had a little knowledge on gender issues, but she did not take it seriously. As a Mosotho woman, she only knew that she should listen to her husband and her husband should have final say. “You see now, I am the oldest councillor in here, so those issues were very difficult for me as a Mosotho woman. I had to work very hard to understand and welcome them, but thanks to Gender Links for its lessons.”

In 2011 just before the 2nd local government elections, Gender Links held a workshop called women in politics here at the Tsoelikana council, for women who were going to contest for the elections. She was among those people, and that’s when she first encountered Gender Links. The workshop equipped them with knowledge on gender issues, their role in government as women, and how they should support each other as women. Those and many other issues were discussed to prepare them for the elections. Moloisane said the workshop boosted their self confidence as women, because some of them did not even believe that they could be such important leaders in their community, while others did not believe they could be councillors, since they believed that politics are for only men.

She mentioned that after the workshop, they were told to have journals where they wrote all about the gatherings while campaigning. She took down the challenges and strengths on the campaign trail, ad later reflected that those journals helped her so much, because she was able to track her job during the campaigns. She won the elections and became a councillor. Later that year, she again met with Gender Links, where they were holding a workshop for councillors. The issues discussed were many, but the emphasis was on gender. It was not her first time hearing about gender issues, but that time they were clearer, and she really understood their importance.

She decided to talk about those issues at her public gatherings so that she could highlight their importance, and also because she knew that it’s going to be difficult for people to accept gender equality easily, especially in rural areas. Moloisane also mentioned that in her community, she has managed to form support groups of both women and men, and they participate equally. People are now able to work on issues affecting them as both women and men without saying that some things can only be done by women or men. The have also worked together regardless of their different political affiliations. She closed in saying that Gender Links has played a major role to her as a Mosotho woman, and has changed so many people’s mind sets and the way they were looking at gender issues.