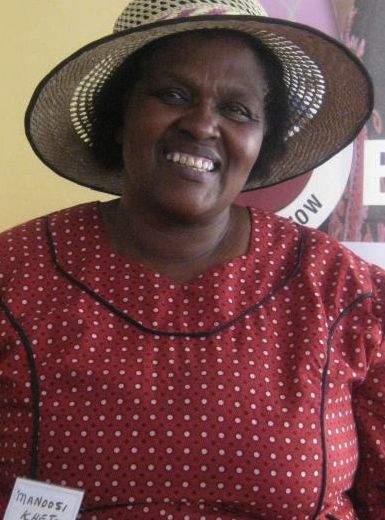 Manoosi Khetsi is a well respected and very powerful woman in her village, both in politics and in other social development activities. She is the councillor in Tsime village where she also works as a trained village health worker. Her career is more challenging serving a remote village of Lesotho, particularly in this era of HIV and AIDS. She is involved in care work and has encouraged many women and men to join the care work groups to support victims of HIV and other related diseases within the village.

Khetsi first met GL during the workshop held for women who were standing for local government elections. After she became a councillor, her council became one of the Centres of Excellency (COE) and she continues to interact with Gender Links (GL) as her council works with GL. She regularly attends GL workshops during the COE stage workshops.

More men now understand the importance of being part of support groups in the village. Before, men viewed care work as a women’s activity. However, Khetsi’s advocacy work on the issue has influenced men to appreciate that care work is for everyone. A fair number of men are showing interest as more men are joining support groups.

At the beginning, Khetsi struggled a lot to win the hearts of men and their understanding that care work has been viewed as the work for women not men. It was difficult for her to convince men that care work needs the involvement of men. They called her names, saying that she wanted to be a ‘master of everything’ in the village. “They called me names, but I got support from some people, who advised me to change my tactics assuring me of winning more support in the village,” said Khetsi.

Khetsi says that from time to time she consults with Gender Links when faced with difficult and challenging situations. She has learned that more work can be done through joining hands. Khetsi says she has learnt a lot through working with GL, and she has gained skills on conflict management and how to work towards empowering women economically. Now the support groups also engage in small scale farming, like the production of vegetables for better health.

“All these have been gained through working with GL during the many COE workshops held where the candidate was a participant. People are beginning to understand issues of gender differently, as opposed to before. There is some change in attitudes,” said Khetsi.

The politician acknowledges the support from other women with whom she worked, especially in making men understand the importance of being part of care work. This is because they have realised that care does not only involve washing the sick but also involves many issues like counselling the sick. We all need each other.

As a politician, Khetsi believes that she has to bring change to peoples’ lives, since they elected her into the councillor position with the hope that she will be able to influence change. “As a woman also, I believe that it is time for women to show the world that women are as capable as men to bring change in peoples’ lives. Men should not feel intimidated by the presence of women but rather they should take advantage of that and join efforts and promote the economy,” said Khetsi.

Many people are inspired by others who do good things, so this can easily change other people’s lives in that they would want to associate with such people and also do good things. This is the case with Khetsi. More people now are happy to work with her, and at the end of the day that brings about change in those people lives. Finally, she plans to work with more villages within the Likila council so that people within these villages also see the importance of care works and involvement of men.