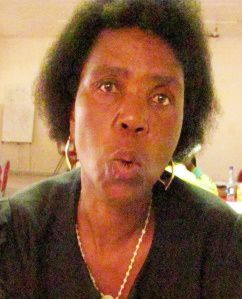 “There was a time when I wanted to give up because I realised that I was not selling much as there were so many of us and most people were not attracted to the stuff, but Gender Links (GL) was able to help me know how to market my wares and also the importance of choosing the right location for the business”

All she could remember was seeing herself sitting in the corner of the Council writing her story. That day brought back so many memories and unfortunately they were only painful ones. Mantahli Cheche was born and bred in Botha Bothe. At a very young age she was forced into a marriage with somebody that she did not know, whom she had to learn to love and make part of her life.

She is a young Mosotho woman who survives by selling fruit and vegetables at the taxi rank. She has been doing that for a very long time now and this is how she manages to pay her children’s school fees. Cheche was married to a man that she did not know at all, she saw him for the first time when he was already her husband. They lived together without any problems for almost two years as she learnt to love and appreciate him as her partner. He was working on the mines in South Africa meaning that most of the time he was not around and Cheche was the one looking after their children, ensuring that they could go to school. Her husband stopped coming home and Cheche was struggling with the children and everybody knew that it was really hard for her and that is why her councillor contacted her first when he heard about the Gender Links (GL) entrepreneurship programme.

She came to the council during the “I” story workshop and that was the first she heard of GL as an organisation and she learnt more about it. When she attended the workshops she was already in a very abusive relationship with her husband and he and made many attempts to kick her out, but she refused as she did not know where she would go. Her husband was very reluctant for her to attend these training sessions, to the extent that sometimes she would just go without his permission. Cheche mentioned that she learnt so many things at the workshop and she was able to turn her life around. Her husband was having an affair with her neighbour and when she tried to confront him he would beat her. He was also a very heavy drinker and every time he came home from the shebeen he would wake her and the children and swear at them. She lived that life for almost her whole married life and her husband was fired at work because he spent most of the time drunk and even bunked work.

She then realised that she needed to work hard so that she could provide for her children; that is when she decided to go and sell fruit at the taxi rank. Although the business was not doing very well she just persisted as she had no other options at all. After she attended three phases of the workshops she started to look at life in a different way. She learnt so many things that changed her totally; she then was able to keep books, record business transactions and reconcile her books. She was able to pay herself a salary every month after balancing the books, that is something that she had not done as she had even sometimes used the money that was supposed to buy stock. She feels that she would not have been able to do all these things if it was not for GL and the training. She had lost hope in her life, but GL was able to help her to regain that and she maintains that GL can take credit because when she looked at the way things were before she came across GL, people would understand why she gave all the credit to GL.

She started selling only a few apples and bananas, but now she sells many things because of the knowledge she has gained, especially the skills to manage a business. She added that her life has changed a lot because she is able to buy things for her children and join a women’s association that she is able to pay each month. She highlighted that she is now able to use a computer to advertise and even to do some market research. “There was a time when I wanted to give up because I realised that I was not selling much as there were so many of us and most people were not attracted to our stuff, but GL was able to help me on how best to market what I sell and also the importance of choosing the right location for the business,” said Cheche. Her children also help to sell after school and they take some things to school to make extract cash and also to help their mother. Her husband realised that she was making progress and no longer asked him for money because she was making it herself. He got jealous and moved out of the house and went to stay with the woman next door whom he was dating. Since Cheche had been empowered she was able to deal with this and she was still confident and never allowed her self-esteem to be tarnished. She worked very hard to ensure that she tolerates these issues.

She has motivated many people who did not have hope after being abused and some of them did not even report the abuse, but she was able to encourage them to go and report it. She formed a support group where they meet as survivors of gender based violence and contribute some money that they give each other at the end of the each month.

Her future plan is to see her business growing and she would like to sell in different parts around Botha-Bothe. She would also like to appeal to GL to keep on empowering women using entrepreneurship training as it is very important and has changed their lives so much.